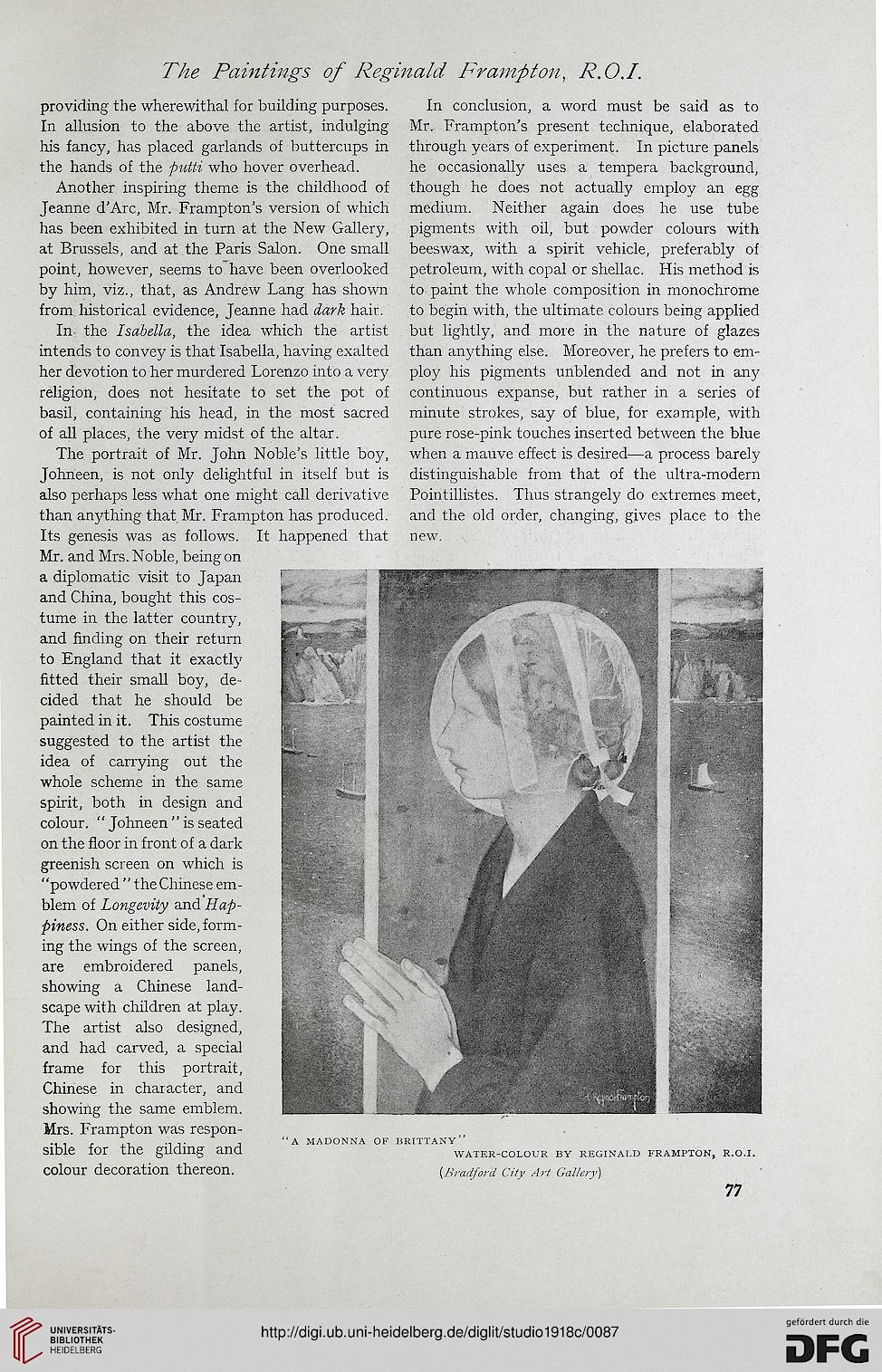 Information about OCR text
The Paintings of Reginald Frampton, R.O.I.

providing the wherewithal for building purposes. In conclusion, a word must be said as to
In allusion to the above the artist, indulging Mr. Frampton's present technique, elaborated
his fancy, has placed garlands of buttercups in through years of experiment. In picture panels
the hands of the putti who hover overhead. he occasionally uses a tempera background,

Another inspiring theme is the childhood of though he does not actually employ an egg
Jeanne d'Arc, Mr. Frampton's version of which medium. Neither again does he use tube
has been exhibited in turn at the New Gallery, pigments with oil, but powder colours with
at Brussels, and at the Paris Salon. One small beeswax, with a spirit vehicle, preferably of
point, however, seems to have been overlooked petroleum, with copal or shellac. His method is
by him, viz., that, as Andrew Lang has shown to paint the whole composition in monochrome
from historical evidence, Jeanne had dark hair. to begin with, the ultimate colours being applied

In the Isabella, the idea which the artist but lightly, and more in the nature of glazes
intends to convey is that Isabella, having exalted than anything else. Moreover, he prefers to em-
her devotion to her murdered Lorenzo into a very ploy his pigments unblended and not in any
religion, does not hesitate to set the pot of continuous expanse, but rather in a series of
basil, containing his head, in the most sacred minute strokes, say of blue, for example, with
of all places, the very midst of the altar. pure rose-pink touches inserted between the blue

The portrait of Mr. John Noble's little boy, when a mauve effect is desired—a process barely
Johneen, is not only delightful in itself but is distinguishable from that of the ultra-modern
also perhaps less what one might call derivative Pointillistes. Thus strangely do extremes meet,
than anything that Mr. Frampton has produced, and the old order, changing, gives place to the
Its genesis was as follows. It happened that new.
Mr. and Mrs. Noble, being on
a diplomatic visit to Japan
and China, bought this cos-
tume in the latter country,
and finding on their return
to England that it exactly
fitted their small boy, de-
cided that he should be
painted in it. This costume
suggested to the artist the
idea of carrying out the
whole scheme in the same
spirit, both in design and
colour. "Johneen" is seated
on the floor in front of a dark
greenish screen on which is
"powdered " the Chinese em-
blem of Longevity and Hap-
piness. On either side, form-
ing the wings of the screen,
are embroidered panels,
showing a Chinese land-
scape with children at play.
The artist also designed,
and had carved, a special
frame for this portrait,
Chinese in character, and
showing the same emblem.
Mrs. Frampton was respon-