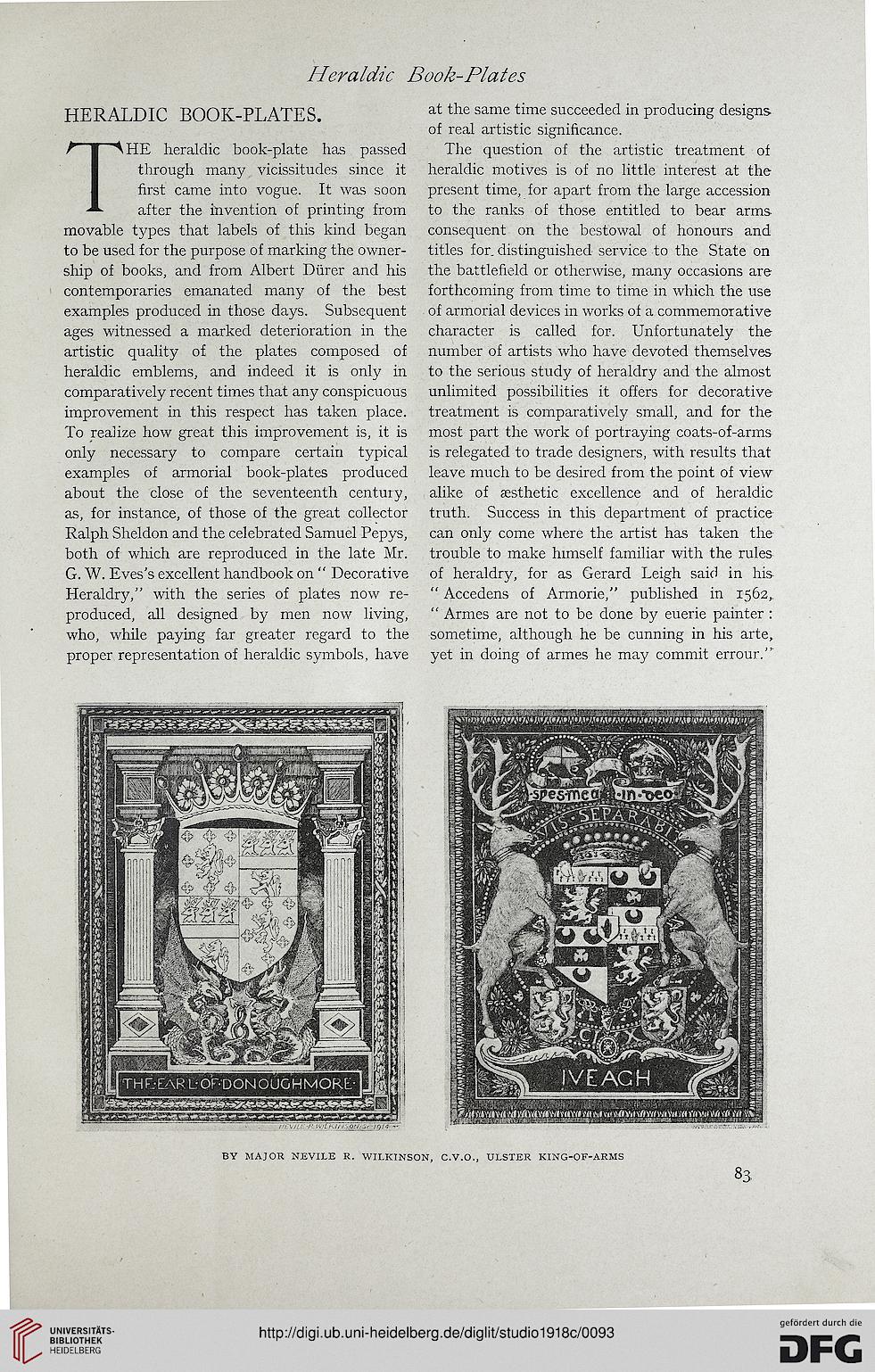 THE heraldic book-plate has passed The question of the artistic treatment of
through many vicissitudes since it heraldic motives is of no little interest at the
first came into vogue. It was soon present time, for apart from the large accession
after the invention of printing from to the ranks of those entitled to bear arms
movable types that labels of this kind began consequent on the bestowal of honours and
to be used for the purpose of marking the owner- titles for. distinguished service to the State on
ship of books, and from Albert Diirer and his the battlefield or otherwise, many occasions are
contemporaries emanated many of the best forthcoming from time to time in which the use
examples produced in those days. Subsequent of armorial devices in works of a commemorative
ages witnessed a marked deterioration in the character is called for. Unfortunately the
artistic quality of the plates composed of number of artists who have devoted themselves
heraldic emblems, and indeed it is only in to the serious study of heraldry and the almost
comparatively recent times that any conspicuous unlimited possibilities it offers for decorative
improvement in this respect has taken place, treatment is comparatively small, and for the
To realize how great this improvement is, it is most part the work of portraying coats-of-arms
only necessary to compare certain typical is relegated to trade designers, with results that
examples of armorial book-plates produced leave much to be desired from the point of view
about the close of the seventeenth century, alike of aesthetic excellence and of heraldic
as, for instance, of those of the great collector truth. Success in this department of practice-
Ralph Sheldon and the celebrated Samuel Pepys, can only come where the artist has taken the
both of which are reproduced in the late Mr. trouble to make himself familiar with the rules
G. W. Eves's excellent handbook on " Decorative of heraldry, for as Gerard Leigh said in his
Heraldry/' with the series of plates now re- " Accedens of Armorie," published in 1562,,
produced, all designed by men now living, " Armes are not to be done by euerie painter :
who, while paying far greater regard to the sometime, although he be cunning in his arte,
proper representation of heraldic symbols, have yet in doing of armes he may commit errour."