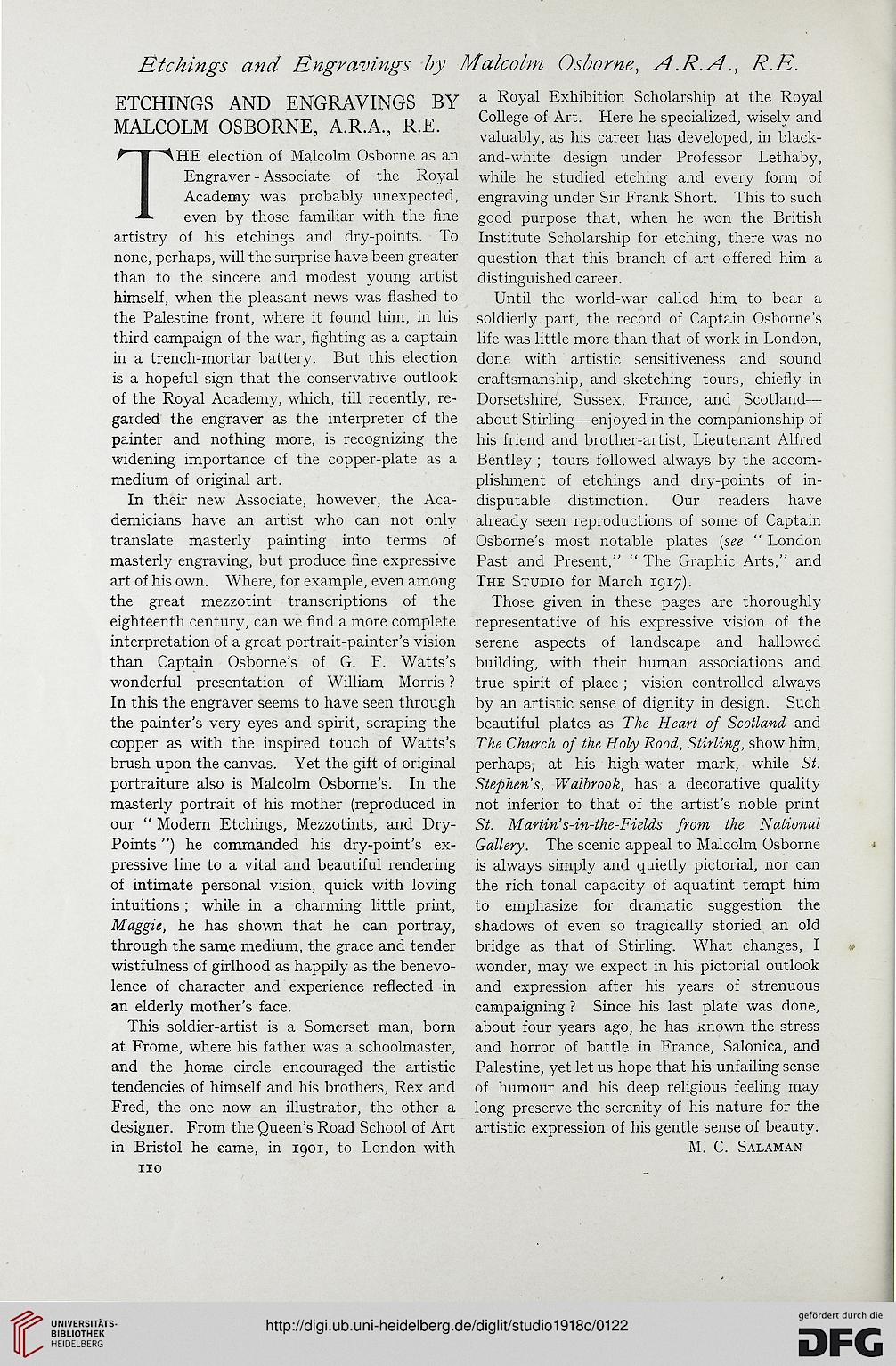 THE election of Malcolm Osborne as an
Engraver - Associate of the Royal
Academy was probably unexpected,
even by those familiar with the fine
artistry of his etchings and dry-points. To
none, perhaps, will the surprise have been greater
than to the sincere and modest young artist
himself, when the pleasant news was flashed to
the Palestine front, where it found him, in his
third campaign of the war, fighting as a captain
in a trench-mortar battery. But this election
is a hopeful sign that the conservative outlook
of the Royal Academy, which, till recently, re-
garded the engraver as the interpreter of the
painter and nothing more, is recognizing the
widening importance of the copper-plate as a
medium of original art.

In their new Associate, however, the Aca-
demicians have an artist who can not only
translate masterly painting into terms of
masterly engraving, but produce fine expressive
art of his own. Where, for example, even among
the great mezzotint transcriptions of the
eighteenth century, can we find a more complete
interpretation of a great portrait-painter's vision
than Captain Osborne's of G. F. Watts's
wonderful presentation of William Morris ?
In this the engraver seems to have seen through
the painter's very eyes and spirit, scraping the
copper as with the inspired touch of Watts's
brush upon the canvas. Yet the gift of original
portraiture also is Malcolm Osborne's. In the
masterly portrait of his mother (reproduced in
our " Modern Etchings, Mezzotints, and Dry-
Points") he commanded his dry-point's ex-
pressive line to a vital and beautiful rendering
of intimate personal vision, quick with loving
intuitions; while in a charming little print,
Maggie, he has shown that he can portray,
through the same medium, the grace and tender
wistfulness of girlhood as happily as the benevo-
lence of character and experience reflected in
an elderly mother's face.

This soldier-artist is a Somerset man, born
at Frome, where his father was a schoolmaster,
and the home circle encouraged the artistic
tendencies of himself and his brothers, Rex and
Fred, the one now an illustrator, the other a
designer. From the Queen's Road School of Art
in Bristol he came, in 1901, to London with
no

a Royal Exhibition Scholarship at the Royal
College of Art. Here he specialized, wisely and
valuably, as his career has developed, in black-
and-white design under Professor Lethaby,
while he studied etching and every form of
engraving under Sir Frank Short. This to such
good purpose that, when he won the British
Institute Scholarship for etching, there was no
question that this branch of art offered him a
distinguished career.

Until the world-war called him to bear a
soldierly part, the record of Captain Osborne's
life was little more than that of work in London,
done with artistic sensitiveness and sound
craftsmanship, and sketching tours, chiefly in
Dorsetshire, Sussex, France, and Scotland—
about Stirling—enjoyed in the companionship of
his friend and brother-artist, Lieutenant Alfred
Bentley ; tours followed always by the accom-
plishment of etchings and dry-points of in-
disputable distinction. Our readers have
already seen reproductions of some of Captain
Osborne's most notable plates (see " London
Past and Present," " The Graphic Arts," and
The Studio for March 1917).

Those given in these pages are thoroughly
representative of his expressive vision of the
serene aspects of landscape and hallowed
building, with their human associations and
true spirit of place ; vision controlled always
by an artistic sense of dignity in design. Such
beautiful plates as The Heart of Scotland and
The Church of the Holy Rood, Stirling, show him,
perhaps, at his high-water mark, while St.
Stephen's, Walbrook, has a decorative quality
not inferior to that of the artist's noble print
St. Martin's-in-the-Fields from the National
Gallery. The scenic appeal to Malcolm Osborne
is always simply and quietly pictorial, nor can
the rich tonal capacity of aquatint tempt him
to emphasize for dramatic suggestion the
shadows of even so tragically storied an old
bridge as that of Stirling. What changes, I
wonder, may we expect in his pictorial outlook
and expression after his years of strenuous
campaigning ? Since his last plate was done,
about four years ago, he has icnown the stress
and horror of battle in France, Salonica, and
Palestine, yet let us hope that his unfailing sense
of humour and his deep religious feeling may
long preserve the serenity of his nature for the
artistic expression of his gentle sense of beauty.