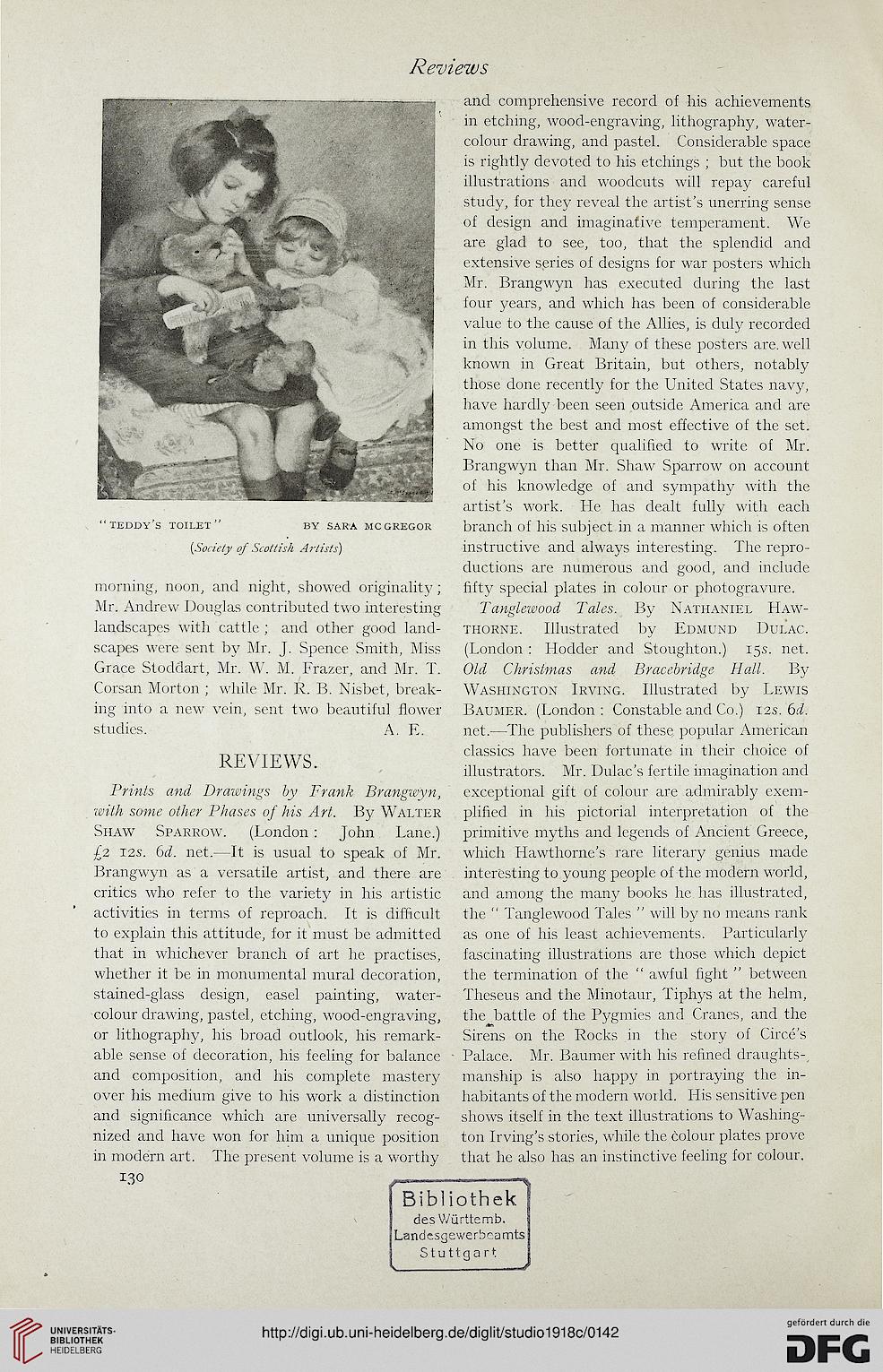 Prints and Drawings by Frank Brangwyn,
with some other Phases of his Art. By Walter
Shaw Sparrow. (London : John Lane.)
£2 12s. 6d. net.—It is usual to speak of Mr.
Brangwyn as a versatile artist, and there are
critics who refer to the variety in his artistic
activities in terms of reproach. It is difficult
to explain this attitude, for it must be admitted
that in whichever branch of art he practises,
whether it be in monumental mural decoration,
stained-glass design, easel painting, water-
colour drawing, pastel, etching, wood-engraving,
or lithography, his broad outlook, his remark-
able sense of decoration, his feeling for balance
and composition, and his complete mastery
over his medium give to his work a distinction
and significance which are universally recog-
nized and have won for him a unique position
in modern art. The present volume is a worthy
130

and comprehensive record of his achievements
in etching, wood-engraving, lithography, water-
colour drawing, and pastel. Considerable space
is rightly devoted to his etchings ; but the book
illustrations and woodcuts will repay careful
study, for they reveal the artist's unerring sense
of design and imaginative temperament. We
are glad to see, too, that the splendid and
extensive series of designs for war posters which
Mr. Brangwyn has executed during the last
four years, and which has been of considerable
value to the cause of the Allies, is duly recorded
in this volume. Many of these posters are. well
known in Great Britain, but others, notably
those done recently for the United States navy,
have hardly been seen outside America and are
amongst the best and most effective of the set.
No one is better qualified to write of Mr.
Brangwyn than Mr. Shaw Sparrow on account
of his knowledge of and sympathy with the
artist's work. He has dealt fully with each
branch of his subject in a manner which is often
instructive and always interesting. The repro-
ductions are numerous and good, and include
fifty special plates in colour or photogravure.

Tanglewood Tales. By Nathaniel Haw-
thorne. Illustrated by Edmund Dulac.
(London : Hodder and Stoughton.) 15s. net.
Old Christmas and Bracebridge Hall. By
Washington Irving. Illustrated by Lewis
Baumer. (London : Constable and Co.) 12s. 6d.
net.—The publishers of these popular American
classics have been fortunate in their choice of
illustrators. Mr. Dulac's fertile imagination and
exceptional gift of colour are admirably exem-
plified in his pictorial interpretation of the
primitive myths and legends of Ancient Greece,
which Hawthorne's rare literary genius made
interesting to young people of the modern world,
and among the many books he has illustrated,
the " Tanglewood Tales " will by no means rank
as one of his least achievements. Particularly
fascinating illustrations are those which depict
the termination of the " awful fight " between
Theseus and the Minotaur, Tiphys at the helm,
the battle of the Pygmies and Cranes, and the
Sirens on the Rocks in the story of Circe's
Palace. Mr. Baumer with his refined draughts-,
manship is also happy in portraying the in-
habitants of the modern world. His sensitive pen
shows itself in the text illustrations to Washing-
ton Irving's stories, while the colour plates prove
that he also has an instinctive feeling for colour.