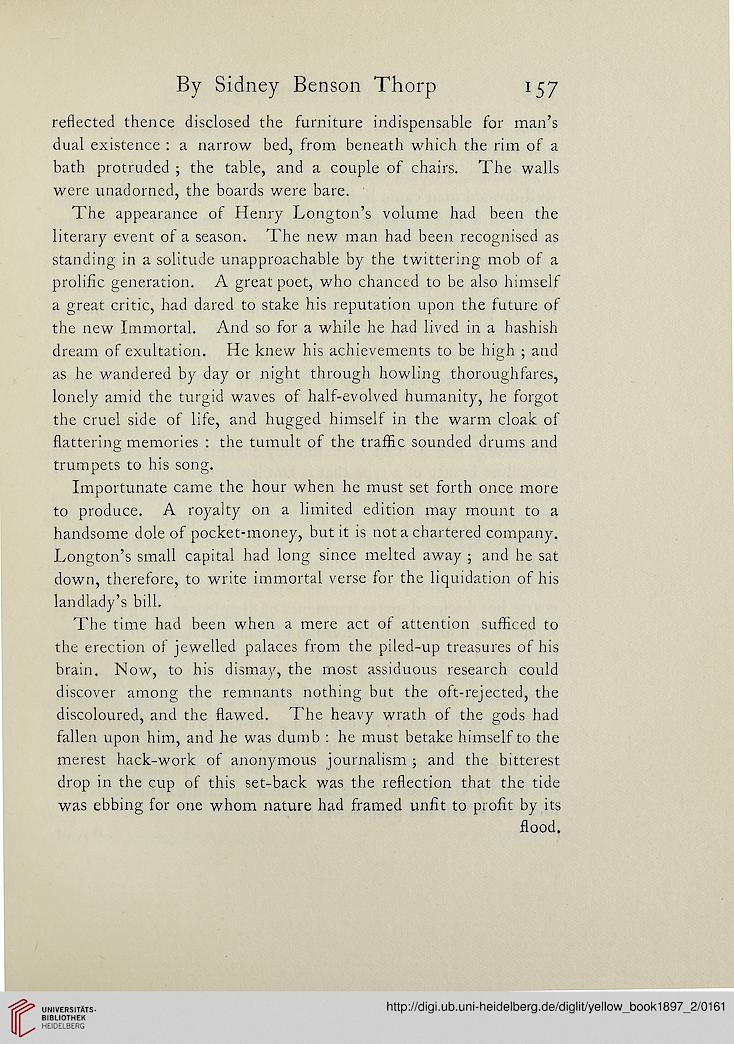 reflected thence disclosed the furniture indispensable for man’s
dual existence : a narrow bed, from beneath which the rim of a
bath protruded ; the table, and a couple of chairs. The walls
were unadorned, the boards were bare.

The appearance of Henry Longton’s volume had been the
literary event of a season. The new man had been recognised as
standing in a solitude unapproachable by the twittering mob of a
prolific generation. A great poet, who chanced to be also himself
a great critic, had dared to stake his reputation upon the future of
the new Immortal. And so for a while he had lived in a hashish
dream of exultation. Fie knew his achievements to be high ; and
as he wandered by day or night through howling thoroughfares,
lonely amid the turgid waves of half-evolved humanity, he forgot
the cruel side of life, and hugged himself in the warm cloak of
flattering memories : the tumult of the traffic sounded drums and
trumpets to his song.

Importunate came the hour when he must set forth once more
to produce. A royalty on a limited edition may mount to a
handsome dole of pocket-money, but it is not a chartered company.
Longton’s small capital had long since melted away ; and he sat
down, therefore, to write immortal verse for the liquidation of his
landlady’s bill.

The time had been when a mere act of attention sufficed to
the erection of jewelled palaces from the piled-up treasures of his
brain. Now, to his dismay, the most assiduous research could
discover among the remnants nothing but the oft-rejected, the
discoloured, and the flawed. The heavy wrath of the gods had
fallen upon him, and he was dumb : he must betake himself to the
merest hack-work of anonymous journalism ; and the bitterest
drop in the cup of this set-back was the reflection that the tide
was ebbing for one whom nature had framed unfit to profit by its