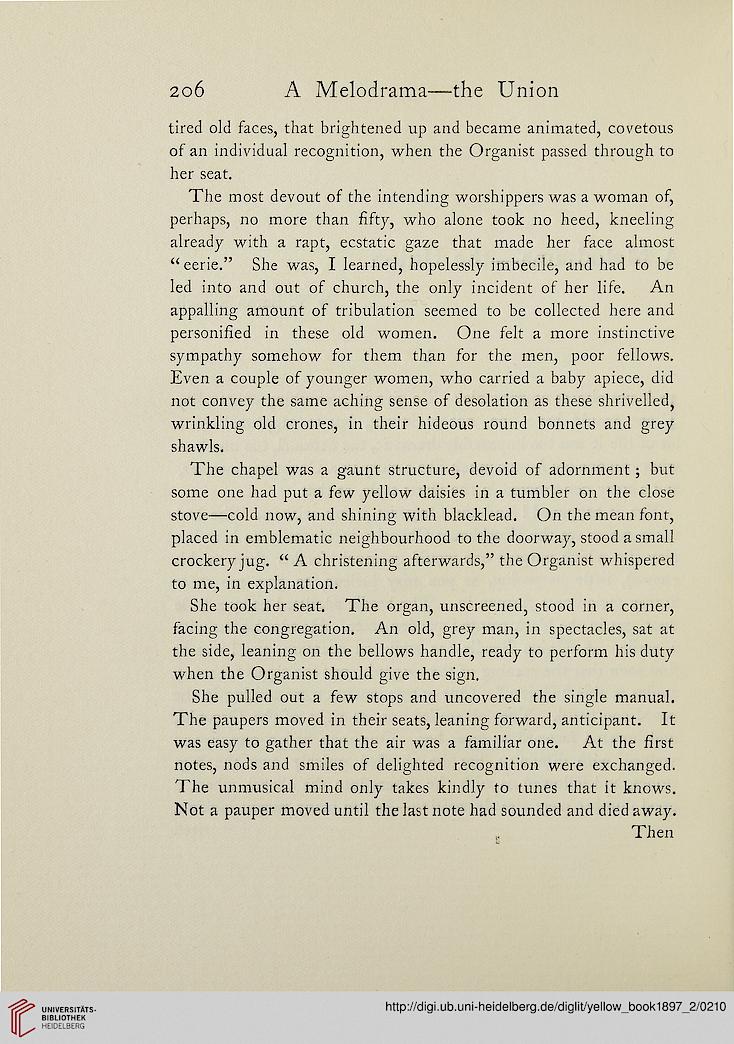 tired old faces, that brightened up and became animated, covetous
of an individual recognition, when the Organist passed through to
her seat.

The most devout of the intending worshippers was a woman of,
perhaps, no more than fifty, who alone took no heed, kneeling
already with a rapt, ecstatic gaze that made her face almost
“eerie.” She was, I learned, hopelessly imbecile, and had to be
led into and out of church, the only incident of her life. An
appalling amount of tribulation seemed to be collected here and
personified in these old women. One felt a more instinctive
sympathy somehow for them than for the men, poor fellows.
Even a couple of younger women, who carried a baby apiece, did
not convey the same aching sense of desolation as these shrivelled,
wrinkling old crones, in their hideous round bonnets and grey
shawls.

The chapel was a gaunt structure, devoid of adornment ; but
some one had put a few yellow daisies in a tumbler on the close
stove—cold now, and shining with blacklead. On the mean font,
placed in emblematic neighbourhood to the doorway, stood a small
crockery jug. “ A christening afterwards,” the Organist whispered
to me, in explanation.

She took her seat. The organ, unscreened, stood in a corner,
facing the congregation. An old, grey man, in spectacles, sat at
the side, leaning on the bellows handle, ready to perform his duty
when the Organist should give the sign.

She pulled out a few stops and uncovered the single manual.
The paupers moved in their seats, leaning forward, anticipant. It
was easy to gather that the air was a familiar one. At the first
notes, nods and smiles of delighted recognition were exchanged.
The unmusical mind only takes kindly to tunes that it knows.
Not a pauper moved until the last note had sounded and died away.