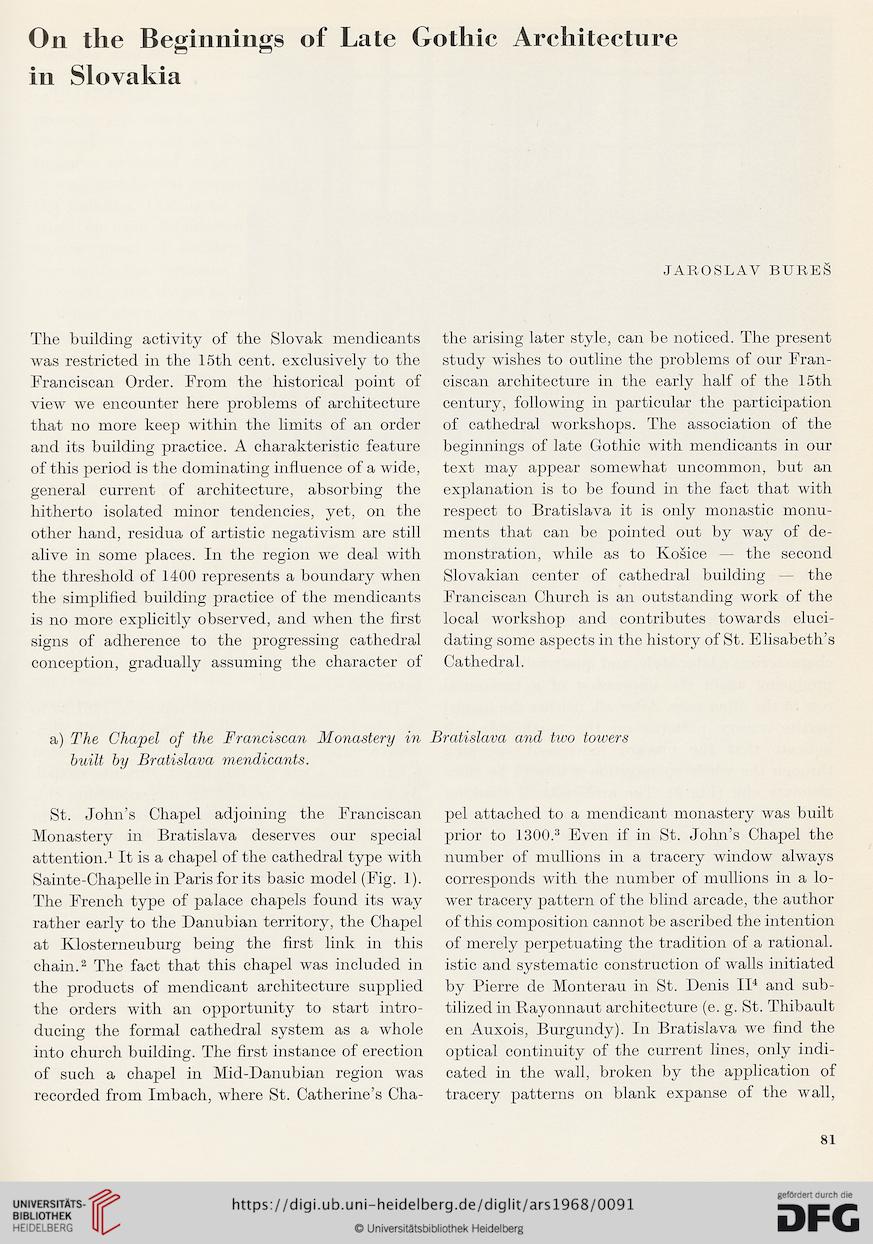 The building activity of the Slovák mendicants
was restricted in the 15th cent, exclusively to the
Franciscan Order. From the historical point of
view we encounter here problems of architecture
that no more keep within the limits of an order
and its building practice. A charakteristic feature
of this period is the dominating influence of a wide,
general current of architecture, absorbing the
hitherto isolated minor tendencies, yet, on the
other hand, residua of artistic negativism are still
ali ve in some places. In the region we deal with
the threshold of 1400 represents a boundary when
the simplified building practice of the mendicants
is no more explicitly observed, and when the hrst
signs of adhérence to the progressing cathédral
conception, gradually assuming the character of

the arising later style, can be noticed. The present
study wishes to outline the problems of our Fran-
ciscan architecture in the early half of the 15th
Century, following in particular the participation
of cathédral workshops. The association of the
beginnings of late Gothic with mendicants in our
text may appear somewhat uncommon, but an
explanation is to be found in the fact that with
respect to Bratislava it is only monastic monu-
ments that can be pointed out by way of dé-
monstration, while as to Košice — the second
Slovakian center of cathédral building — the
Franciscan Church is an outstanding work of the
local workshop and contributes towards eluci-
dating some aspects in the history of St. Elisabeth’s
Cathédral.

a) The Chapel of the Franciscan Monastery in
built by Bratislava mendicants.
St. John’s Chapel adjoining the Franciscan
Monastery in Bratislava deserves our special
attention.1 It is a chapel of the cathédral type with
Sainte-Chapelle in Paris for its basic model (Fig. 1).
The French type of palace chapels found its way
rather early to the Danubian territory, the Chapel
at Klosterneuburg being the first link in this
chain.2 The fact that this chapel was included in
the products of mendicant architecture supplied
the Orders with an opportun! ty to start intro-
ducing the formal cathédral systém as a whole
into church building. The first instance of érection
of such a chapel in Mid-Danubian region was
recorded from Imbach, where St. Catherine’s Cha-

pel attached to a mendicant monastery was built
prior to 1300.3 Even if in St. John’s Chapel the
number of mullions in a tracery window always
corresponds with the number of mullions in a lo-
wer tracery pattem of the blind arcade, the author
of this composition cannot be ascribed the intention
of merely perpetuating the tradition of a rational,
istic and systematic construction of walls initiated
by Pierre de Monterau in St. Denis II4 and sub-
tilized in Rayonnant architecture (e. g. St. Thibault
en Auxois, Burgundy). In Bratislava we find the
optical continuity of the current fines, only indi-
cated in the wall, broken by the application of
tracery patterns on blank expanse of the wall,