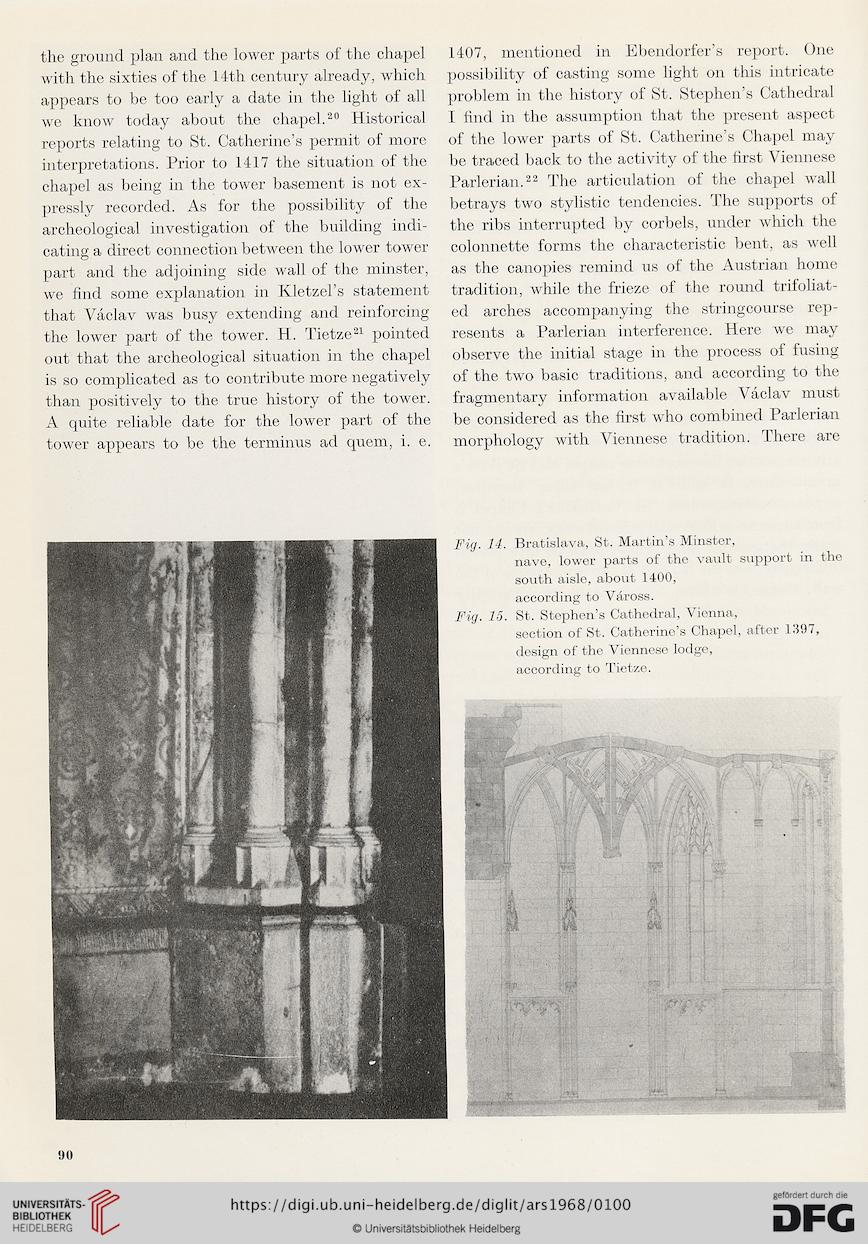 Information about OCR text
the ground plan and the lower parts of the chapel
with the sixties of the 14th Century already, which
appears to be too early a date in the light of all
we know today about the chapel.20 Historical
reports relating to St. Catherine’s permit of more
interprétations. Prior to 1417 the situation of the
chapel as being in the tower basement is not ex-
pressly recorded. As for the possibility of the
archeological investigation of the building indi-
cating a direct connection between the lower tower
part and the adjoining side wall of the minster,
we find some explanation in Kletzel’s Statement
that Václav was busy extending and reinforcing
the lower part of the tower. H. Tietze21 pointed
out that the archeological situation in the chapel
is so complicated as to contribute more negatively
than positively to the true history of the tower.
A quite reliable date for the lower part of the
tower appears to be the terminus ad quem, i. e.

1407, mentioned in Ebendorfer’s report. One
possibility of casting some light on this intricate
problém in the history of St. Stephen’s Cathédral
I find in the assumption that the present aspect
of the lower parts of St. Catherine’s Chapel may
be traced back to the activity of the first Viennese
Parlerian.22 The articulation of the chapel wall
betrays two stylistic tendencies. The supports of
the ribs interrupted by corbels, under which the
colonnette forms the characteristic bent, as well
as the canopies remind us of the Austrian home
tradition, while the frieze of the round trifoliat-
ed arches accompanying the stringcourse rep-
resents a Parlerian interference. Here we may
observe the initial stage in the process of fusing
of the two basic traditions, and according to the
fragmentary information available Václav must
be considered as the first who combined Parlerian
morphology with Viennese tradition. There are


Fig. 14. Bratislava, St. Martin’s Minster,
nave, lower parts of the vault support in the
south aisle, about 1400,
according to Váross.
Fig. 15. St. Stephen’s Cathédral, Vienna,
section of St. Catherine’s Chapel, after 1397,
design of the Viennese lodge,
according to Tietze.