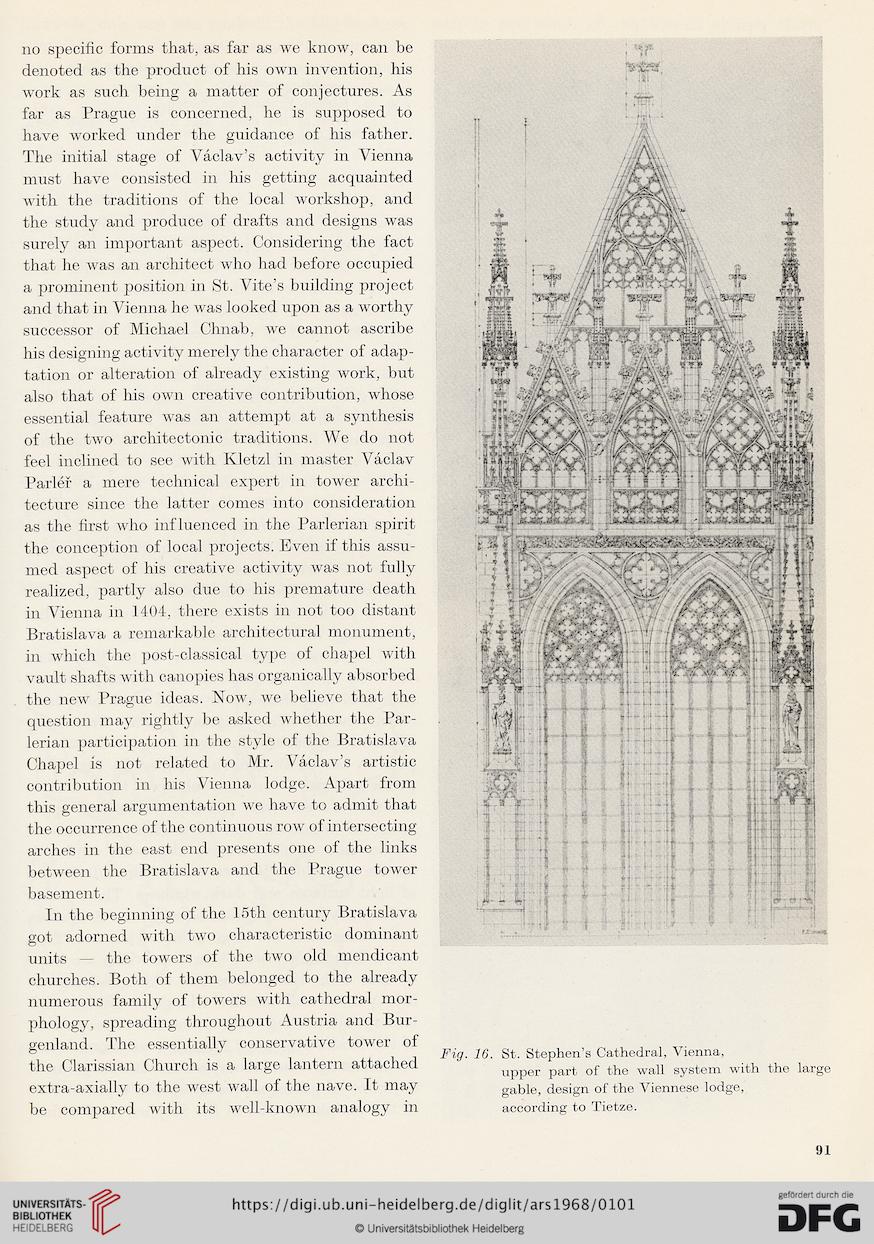 Information about OCR text
no spécifie forms that, as far as we know, can be
denoted as the product of his own invention, his
work as such being a matter of conjectures. As
far as Prague is concerned, he is supposed to
hâve worked under the guidance of his father.
The initial stage of Vâclav’s activity in Vienna
must hâve consisted in his getting acquainted
with the traditions of the local workshop, and
the study and produce of drafts and designs was
surely an important aspect. Considering the fact
that he was an architect who had before occupied
a prominent position in St. Vite’s building project
and that in Vienna he was looked upon as a worthy
successor of Michael Chnab, we cannot ascribe
his designing activity merely the character of adap-
tation or alteration of already existing work, but
also that of his own créative contribution, whose
essential feature was an attempt at a synthesis
of the two architectonie traditions. We do not
feel inclined to see with Kletzl in master Václav
Parléř a mere technical expert in tower archi-
tecture since the latter cornes into considération
as the hrst who influenced in the Parlerian spirit
the conception of local projects. Even if this assu-
med aspect of his créative activity was not fully
realized, partly also due to his prématuré death
in Vienna in 1404, there exists in not too distant
Bratislava a remarkable architectural monument,
in which the post-classical type of chapel with
vault shafts with canopies lias organically absorbed
the new Prague ideas. Now, we believe that the
question niay rightly be asked whether the Par-
lerian participation in the style of the Bratislava
Chapel is not related to Mr. Vâclav’s artistic
contribution in his Vienna lodge. Apart from
this general argumentation we hâve to admit that
the occurrence of the continuons row of intersecting
arches in the east end présents one of the links
between the Bratislava and the Prague tower
basement.
In the beginning of the 15th Century Bratislava
got adorned with two characteristic dominant
units — the towers of the two old mendicant
churches. Both of them belonged to the already
numerous family of towers with cathédral mor-
phology, spreading throughout Austria and Bur-
genland. The essentially conservative tower of
the Clarissian Church is a large lantern attached
extra-axially to the west wall of the nave. It may
be compared with its well-known analogy in


Fig. 16. St. Stephen’s Cathédral, Vienna,
upper part of the wall systém with the large
gable, design of the Viennese lodge,
according to Tietze.