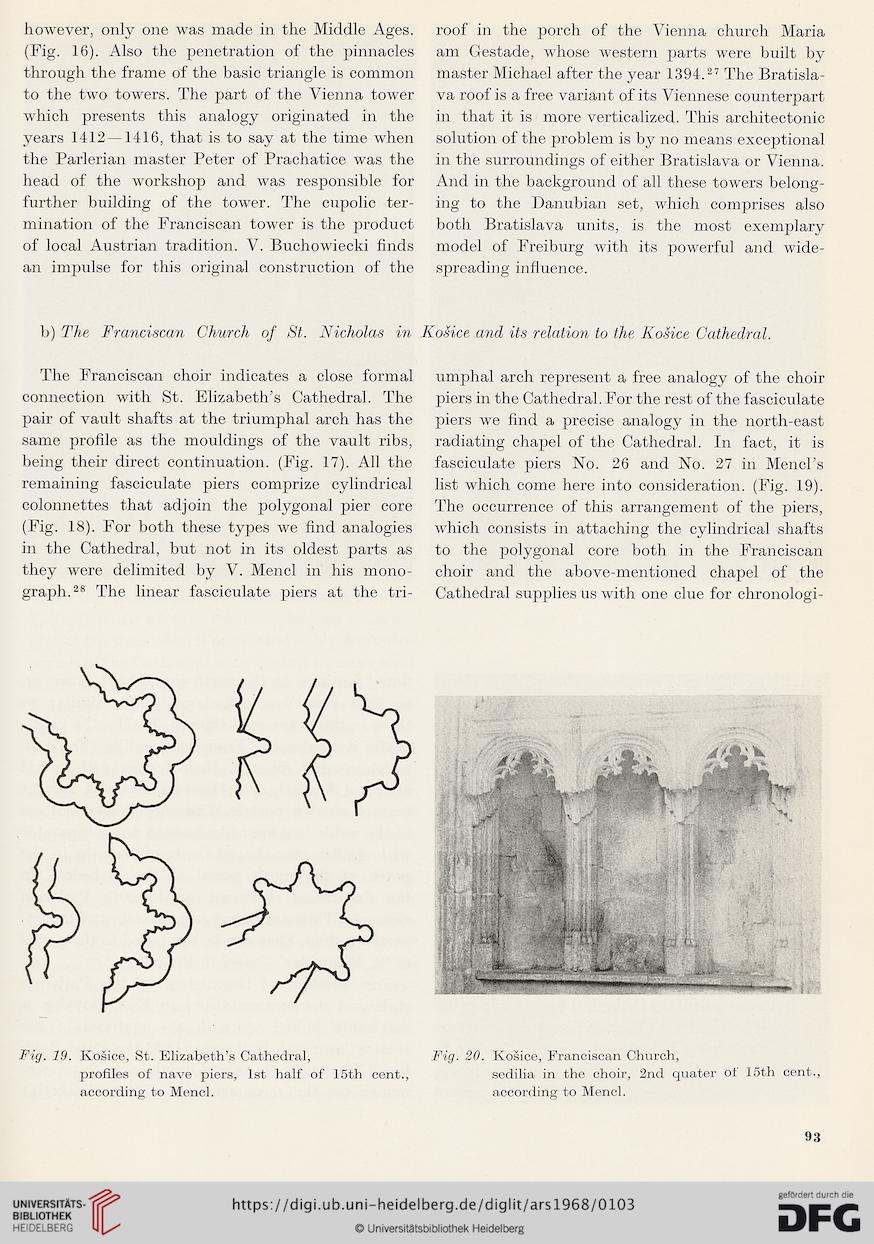 Information about OCR text
however, only one was made in the Middle Ages.
(Fig. 16). Also the pénétration of the pinnacles
through the frame of the basic triangle is common
to the two towers. The part of the Vienna tower
which présents this analogy originated in the
years 1412 —1416, that is to say at the time when
the Parlerian master Peter of Prachatice was the
head of the workshop and was responsible for
further building of the tower. The cupolic ter-
mination of the Franciscan tower is the product
of local Austrian tradition. V. Buchowiecki finds
an impulse for this original construction of the

roof in the porch of the Vienna church Maria
am Gestade, whose western parts were built by
master Michael after the year 1394.27 The Bratisla-
va roof is a free variant of its Viennese counterpart
in that it is more verticalized. This architectonie
solution of the problém is by no means exceptional
in the surroundings of either Bratislava or Vienna.
And in the background of all these towers belong-
ing to the Danubian set, which comprises also
both Bratislava units, is the most exempláry
model of Freiburg with its powerful and wide-
spreading influence.

b) The Franciscan Church of St. Nicholas in
The Franciscan choir indicates a close formal
connection with St. Elizabeth’s Cathédral. The
pair of vault shafts at the triumphal arch has the
same profile as the mouldings of the vault ribs,
being their direct continuation. (Fig. 17). All the
remaining fasciculate piers comprize cylindrical
colonnettes that adjoin the polygonal pier core
(Fig. 18). For both these types we find analogies
in the Cathédral, but not in its oldest parts as
they were delimited by V. Mencl in his mono-
graph.28 The linear fasciculate piers at the tri-

Košice and its relation to the Košice Cathédral.
umphal arch represent a free analogy of the choir
piers in the Cathédral. For the rest of the fasciculate
piers we find a précisé analogy in the north-east
radiating chapel of the Cathédral. In fact, it is
fasciculate piers No. 26 and No. 27 in Mencl’s
list which corne here into considération. (Fig. 19).
The occurrence of this arrangement of the piers,
which consists in attaching the cylindrical shafts
to the polygonal core both in the Franciscan
choir and the above-mentioned chapel of the
Cathédral supplies us with one clue for chronologi-

Fig. 20. Košice, Franciscan Church,
sedilia in the choir, 2nd quater of 15th cent.,
according to Mencl.