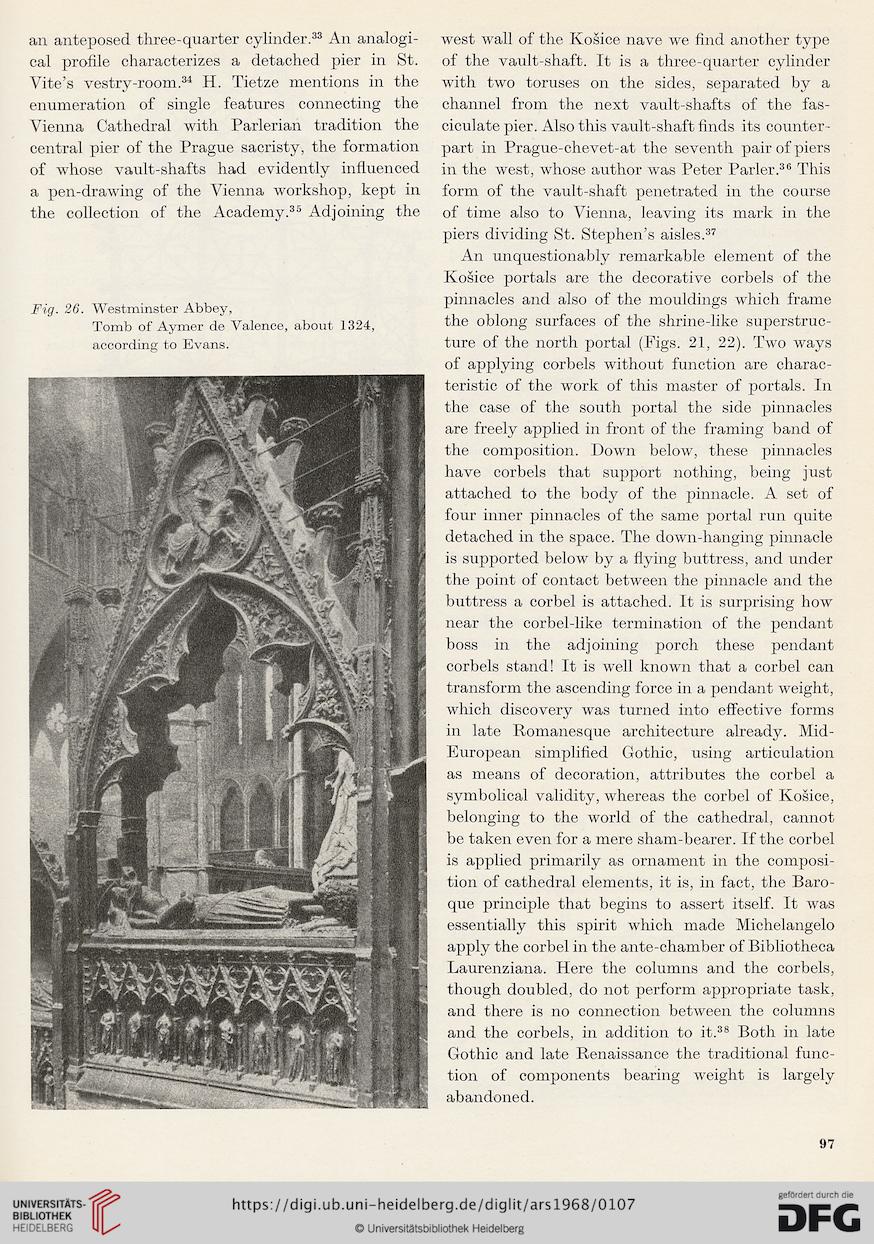 Information about OCR text
an anteposed three-quarter cylinder.33 An analogi-
cal profile characterizes a detached pier in St.
Vite’s vestry-room.34 H. Tietze mentions in the
énumération of single features connecting the
Vienna Cathédral with Parlerian tradition the
central pier of the Prague sacristy, the formation
of whose vault-shafts had evidently influenced
a pen-drawing of the Vienna workshop, kept in
the collection of the Academy.35 Adjoining the

Fig. 26. Westminster Abbey,
Tomb of Aymer de Valence, about 1324,
according to Evans.


west wall of the Košice nave we find another type
of the vault-shaft. It is a three-quarter cylinder
with two toruses on the sides, separated by a
channel from the next vault-shafts of the fas-
ciculate pier. Also this vault-shaft finds its counter-
part in Prague-chevet-at the seventh pairofpiers
in the west, whose author was Peter Parler.36 This
form of the vault-shaft penetrated in the course
of time also to Vienna, leaving its mark in the
piers dividing St. Stephen’s aisles.37
An unquestionably remarkable element of the
Košice portais are the décorative corbels of the
pinnacles and also of the mouldings which frame
the oblong surfaces of the shrine-like superstruc-
ture of the north portai (Figs. 21, 22). Two ways
of applying corbels without function are charac-
teristic of the work of this master of portais. In
the case of the south portai the side pinnacles
are freely applied in front of the framing band of
the composition. Down below, these pinnacles
hâve corbels that support nothing, being just
attached to the body of the pinnacle. A set of
four inner pinnacles of the sanie portai run quite
detached in the space. The down-hanging pinnacle
is supported below by a flying buttress, and under
the point of contact between the pinnacle and the
buttress a corbel is attached. It is surprising how
near the corbel-like termination of the pendant
boss in the adjoining porch these pendant
corbels stand! It is well known that a corbel can
transform the ascending force in a pendant weight,
which discovery was turned into effective forms
in late Romanesque architecture already. Mid-
European simplified Gothic, using articulation
as means of décoration, attributes the corbel a
symbolical validity, whereas the corbel of Košice,
belonging to the world of the cathédral, cannot
be taken even for a mere sham-bearer. If the corbel
is applied primarily as ornament in the composi-
tion of cathédral éléments, it is, in fact, the Baro-
que principle that begins to assert itself. It was
essentially this spirit which made Michelangelo
apply the corbel in the ante-chamber of Bibliotheca
Laurenziana. Here the columns and the corbels,
though doubled, do not perform appropriate task,
and there is no connection between the columns
and the corbels, in addition to it.38 Both in late
Gothic and late Renaissance the traditional func-
tion of components bearing weight is largely
abandoned.