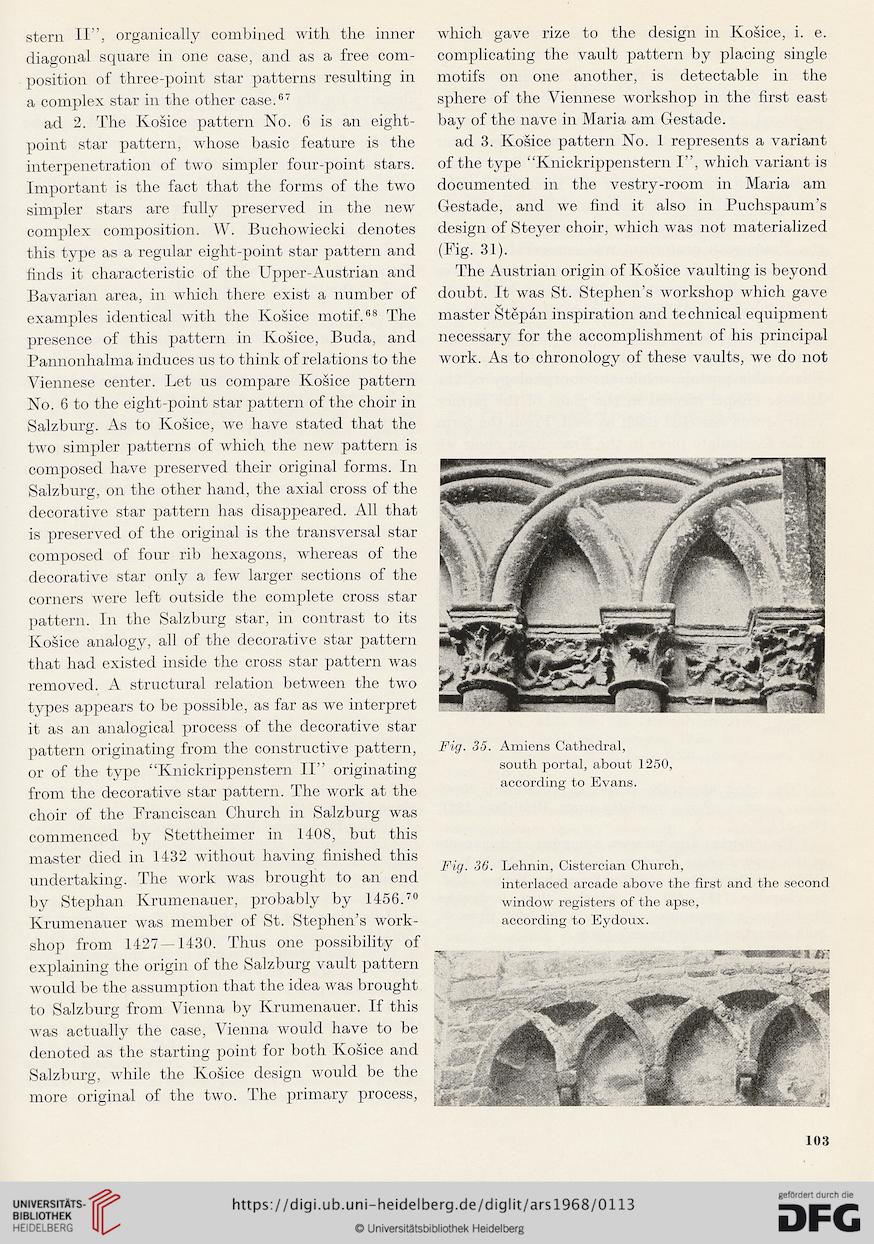 Information about OCR text
stern II”, organically combinée! with the inner
diagonal square in one case, and as a free com-
position of three-point star patterns resulting in
a complex star in the other case.67
ad 2. The Košice pattern No. 6 is an eight-
point star pattern, whose basic feature is the
interpénétration of two simpler four-point stars.
Important is the fact that the forms of the two
simpler stars are fully preserved in the new
complex composition. W. Buchowiecki dénotés
this type as a regulär eight-point star pattern and
finds it characteristic of the Upper-Austrian and
Bavarian area, in which there exist a number of
examples identical with the Košice motif.68 The
presence of this pattern in Košice, Buda, and
Pannonhalma induces us to thiiik of relations to the
Viennese center. Let us compare Košice pattern
No. 6 to the eight-point star pattern of the choir in
Salzburg. As to Košice, we háve stated that the
two simpler patterns of which the new pattern is
composed háve preserved their original forms. In
Salzburg, on the other hand, the axial cross of the
décorative star pattern has disappeared. All that
is preserved of the original is the transversal star
composed of four rib hexagons, whereas of the
décorative star only a few larger sections of the
corners were left outside the complété cross star
pattern. In the Salzburg star, in contrast to its
Košice analogy, all of the décorative star pattern
that had existed inside the cross star pattern was
removed. A structural relation between the two
types appears to be possible, as far as we interpret
it as an analogical process of the décorative star
pattern originating from the constructive pattern,
or of the type “Knickrippenstern II” originating
from the décorative star pattern. The work at the
choir of the Franciscan Church in Salzburg was
commenced by Stettheimer in 1408, but this
master died in 1432 without having finished this
undertaking. The work was brought to an end
by Stephan Krumenauer, probably by 1456.70
Krumenauer was member of St. Stephen’s Work-
shop from 1427—1430. Thus one possibility of
explaining the origin of the Salzburg vault pattern
would be the assumption that the idea was brought
to Salzburg from Vienna by Krumenauer. If this
was actually the case, Vienna would have to be
denoted as the starting point for both Košice and
Salzburg, while the Košice design would be the
more original of the two. The primary process,

which gave rize to the design in Košice, i. e.
complicating the vault pattern by placing single
motifs on one another, is détectable in the
sphere of the Viennese workshop in the first east
bay of the nave in Maria am Gestade.
ad 3. Košice pattern No. 1 represents a variant
of the type “Knickrippenstern I”, which variant is
documented in the vestry-room in Maria am
Gestade, and we find it also in Puchspaum’s
design of Steyer choir, which was not materialized
(Fig. 31).
The Austrian origin of Košice vaulting is beyond
doubt. It was St. Stephen’s workshop which gave
master Štěpán inspiration and technical equipment
necessary for the accomplishment of his principal
work. As to chronology of these vaults, we do not

Fig. 36. Lehnin, Cistercian Church,
interlaced arcade above the first and the second
window registers of the apse,
according to Eydoux.