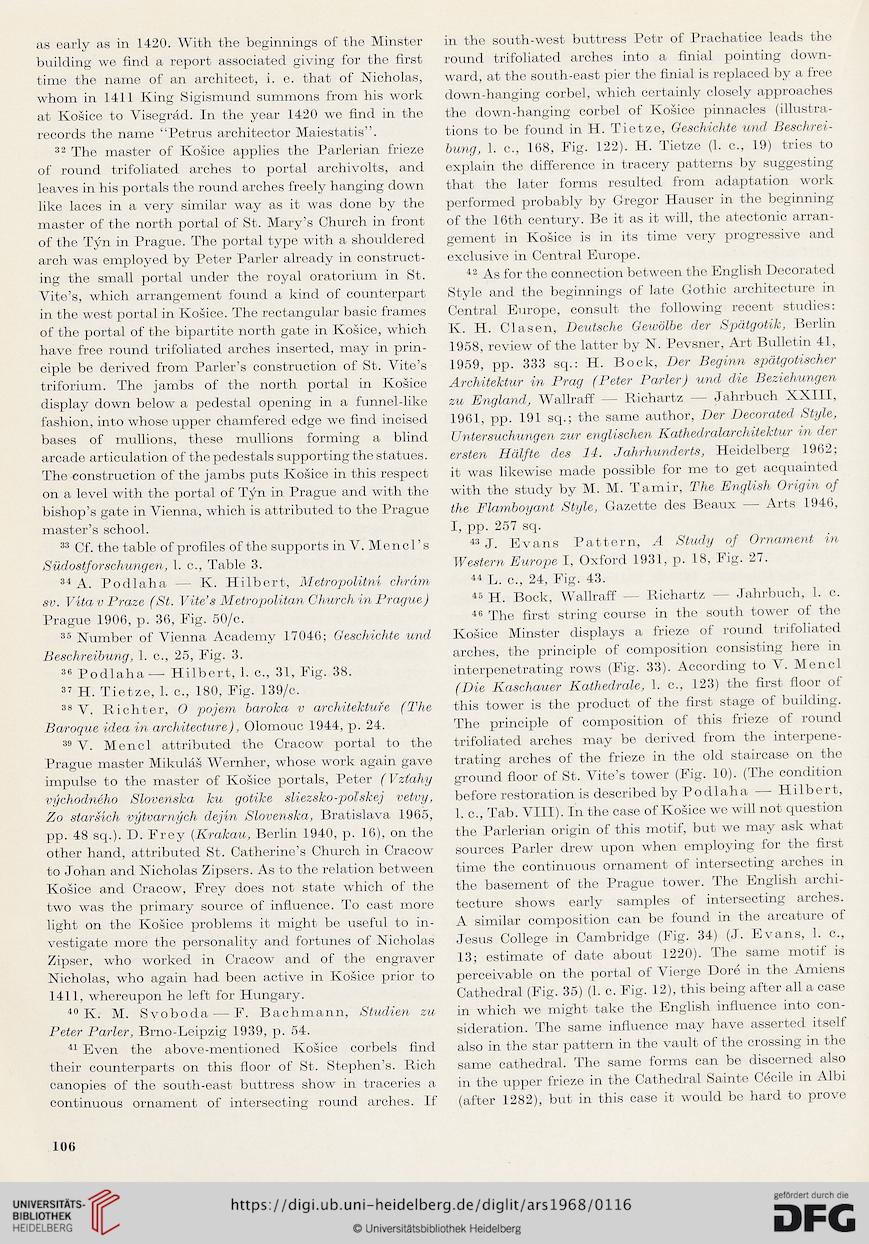 Information about OCR text
as early as in 1420. With the beginnings of the Minster
building we find a report assoeiated giving for the first
time the name of an architect, i. e. that of Nicholas,
whom in 1411 King Sigismund summons from his work
at Košice to Visegrad. In the year 1420 we find in the
records the name “Petrus arehitector Maiestatis”.
32 The master of Košice applies the Parlerian frieze
of round trifoliated arches to portai archivolts, and
leaves in his portais the round arches freely hanging down
like laces in a very similar way as it was done by the
master of the north portal of St. Mary’s Church in front
of the Týn in Prague. The portai type with a shouldered
arch was employed by Peter Parler already in construct-
ing the small portal under the royal oratorium in St.
Vite’s, which arrangement found a kind of counterpart
in the west portal in Košice. The rectangular basic frames
of the portal of the bipartite north gate in Košice, which
have free round trifoliated arches inserted, may in prin-
ciple be derived from Parler’s construction of St. Vite’s
triforium. The jambs of the north portal in Košice
display down below a pedestal opening in a funnel-like
fashion, into whose upper chamfered edge we find incised
bases of mullions, these mullions forming a blind
arcade articulation of thepedestals supporting the statues.
The construction of the jambs puts Košice in this respect
on a level with the portal of Týn in Prague and with the
bishop’s gate in Vienna, which is attributed to the Prague
master’s school.
33 Cf. the table of profiles of the supports in V. Menai’s
Südostforschungen, 1. c., Table 3.
34 A. Podlaha — K. Hilbert, Metropolitní chrám
sv. Vltav Praze (St. Vite’s Metropolitan Church in Prague)
Prague 1906, p. 36, Fig. 50/c.
35 Number of Vienna Academy 17046; Geschichte und
Beschreibung, 1. c., 25, Fig. 3.
36 Podlaha— Hilbert, I. c., 31, Fig. 38.
37 H. Tietze, 1. c., 180, Fig. 139/c.
38 V. Richter, O pojem baroka v architektuře (The
Baroque idea in architecture), Olomouc 1944, p. 24.
39 V. Mencl attributed the Cracow portal to the
Prague master Mikuláš Wernher, whose work again gave
impulse to the master of Košice portais, Peter (Vztahy
východného Slovenska ku gotike sliezsko-polskej vetvy,
Zo starších výtvarných dějin Slovenska, Bratislava 1965,
pp. 48 sq.). D. Frey (Krakau, Berlin 1940, p. 16), on the
other hand, attributed St. Catherine’s Church in Cracow
to Johan and Nicholas Zipsers. As to the relation between
Košice and Cracow, Frey does not state which of the
two was the primary source of influence. To cast more
light on the Košice problems it might be useful to in-
vestigate more the personality and fortunes of Nicholas
Zipser, who worked in Cracow and of the engraver
Nicholas, who again had been active in Košice prior to
1411, whereupon he left for Hungary.
40 K. M. Svoboda-—F. Bachmann, Studien zu
Peter Parler, Brno-Leipzig 1939, p. 54.
41 Even the above-mentioned Košice corbels find
their counterparts on this floor of St. Stephen’s. Rich
eanopies of the south-east buttress show in traceries a
continuous ornament of intersecting round arches. If

in the south-west buttress Petr of Prachatice leads the
round trifoliated arches into a finial pointing down-
ward, at the south-east pier the finial is replaced by a free
down-hanging corbel, which certainly dosely approaches
the down-hanging corbel of Košice pinnacles (illustra-
tions to be found in H. Tietze, Geschichte und Beschrei-
bung, 1. c., 168, Fig. 122). H. Tietze (1. c., 19) tries to
explain the différence in tracery patterns by suggesting
that the later forms resulted from adaptation work
performed probably by Gregor Hauser in the beginning
of the 16th Century. Be it as it will, the atectonic arran-
gement in Košice is in its time very progressive and
exclusive in Central Europe.
42 As for the connection between the English Decorated
Style and the beginnings of late Gothic architecture in
Central Europe, consult the following recent studies:
K. H. Clasen, Deutsche Gewölbe der Spätgotik, Berlin
1958, review of the latter by N. Pevsner, Art Bulletin 41.
1959, pp. 333 sq.: H. Bock, Der Beginn spätgotischer
Architektur in Prag (Peter Parier) und die Beziehungen
zu England, Wallraff — Richartz — Jahrbuch XXIII,
1961, pp. 191 sq.; the same author, Der Decorated Style,
Untersuchungen zur englischen Kathedralarchitektur in der
ersten Hälfte des 14. Jahrhunderts, Heidelberg 1962;
it was likewise made possible for me to get acquainted
with the study by M. M. Tamir, The Enqlish Origin of
the Flamboyant Style, Gazette des Beaux — Arts 1946,
I, pp. 257 sq.
43 J. Evans Pattern, A Study of Ornament in
Western Europe I, Oxford 1931, p. 18, Fig. 27.
44 L. c., 24, Fig. 43.
45 H. Bock, Wallraff — Richartz — Jahrbuch, 1. c.
46 The first string course in the south tower of the
Košice Minster displays a frieze of round trifoliated
arches, the principle of composition consisting here in
interpenetrating rows (Fig. 33). According to V. Mencl
(Die Kaschauer Kathedrale, 1. c., 123) the first floor of
this tower is the product of the first stage of building.
The principle of composition of this frieze of round
trifoliated arches may be derived from the interpene-
trating arches of the frieze in the old staircase on the
ground floor of St. Vite’s tower (Fig. 10). (The condition
before restoration is described by Podlaha — Hilbert,
1. c., Tab. VIII). In the case of Košice we will not question
the Parlerian origin of this motif, but we may ask what
sources Parler drew upon when employing for the first
time the continuous ornament of intersecting arches in
the basement of the Prague tower. The English archi-
tecture shows early samples of intersecting arches.
A similar composition can be found in the arcature of
Jesus College in Cambridge (Fig. 34) (J. Evans, 1. c.,
13; estimate of date about 1220). The same motif is
perceivable on the portai of Vierge Doré in the Amiens
Cathédral (Fig. 35) (1. c. Fig. 12), this being after ail a case
in which we might take the English influence into con-
sidération. The same influence may have asserted itself
also in the star pattern in the vault of the Crossing in the
same cathédral. The same forms can be discerned also
in the upper frieze in the Cathédral Sainte Cécile in Albi
(after 1282), but in this case it would be hard to prove