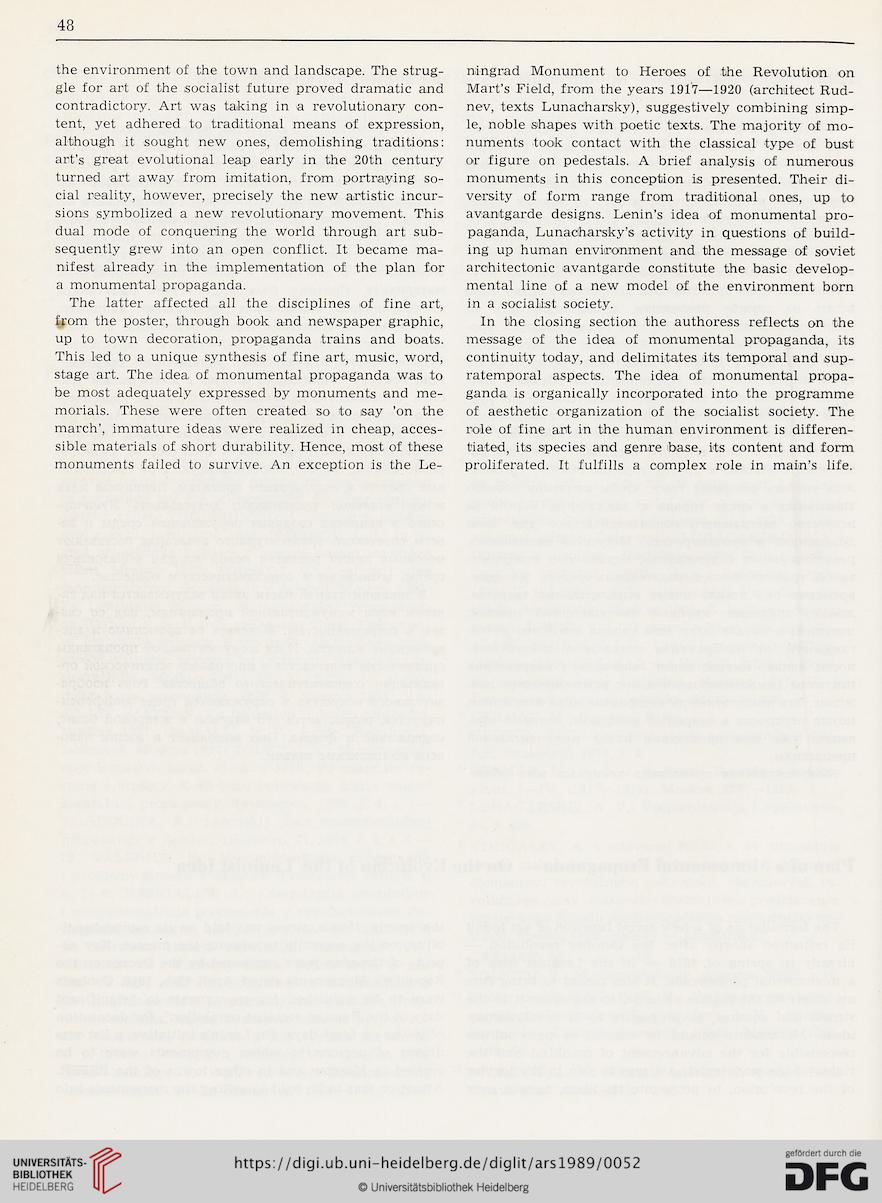 the environment of the town and landscape. The strug-
gle for art of the socialist future proved dramatic and
contradictory. Art was taking in a revolutionary con-
tent, yet adhered to traditional means of expression,
although it sought new ones, demolishing traditions:
arťs great evolutional leap early in the 20th Century
turned art away from imitation, from portraying so-
cial reality, however, precisely the new artistic incur-
sions symbolized a new revolutionary movement. This
dual mode of conquering the World through art sub-
sequently grew into an open conflict. It became ma-
nifest already in the implémentation of the plan for
a monumental propaganda.
The latter affected ail the disciplines of fine art,
from the poster, through book and newspaper graphie,
up to town décoration, propaganda trains and boats.
This led to a unique synthesis of fine art, music, word,
stage art. The idea of monumental propaganda was to
be most adequately expressed by monuments and me-
morials. These were offen created so to say 'on the
march’, immature ideas were realized in cheap, acces-
sible materials of short durability. Hence, most of these
monuments failed to survive. An exception is the Le-

ningrad Monument to Heroes of the Revolution on
Marťs Field, from the years 1917—1920 (architect Rud-
nev, texts Lunacharsky), suggestively combining simp-
le, noble shapes with poetic texts. The majority of mo-
numents took contact with the classical type of bust
or figure on pedestals. A brief analysis of numerous
monuments in this conception is presented. Their di-
versity of form range from traditional ones, up to
avantgardě designs. Lenin’s idea of monumental pro-
paganda, Lunacharsky’s activity in questions of build-
ing up human environment and the message of soviet
architectonie avantgardě constitute the basic develop-
mental line of a new model of the environment born
in a socialist society.
In the closing section the authoress reflects on the
message of the idea of monumental propaganda, its
continuity today, and délimitâtes its temporal and sup-
ratemporal aspects. The idea of monumental propa-
ganda is organically incorporated into the programme
of aesthetic organization of the socialist society. The
role of fine art in the human environment is differen-
tiated, its species and genre base, its content and form
proliferated. It fulfills a complex role in main’s life.