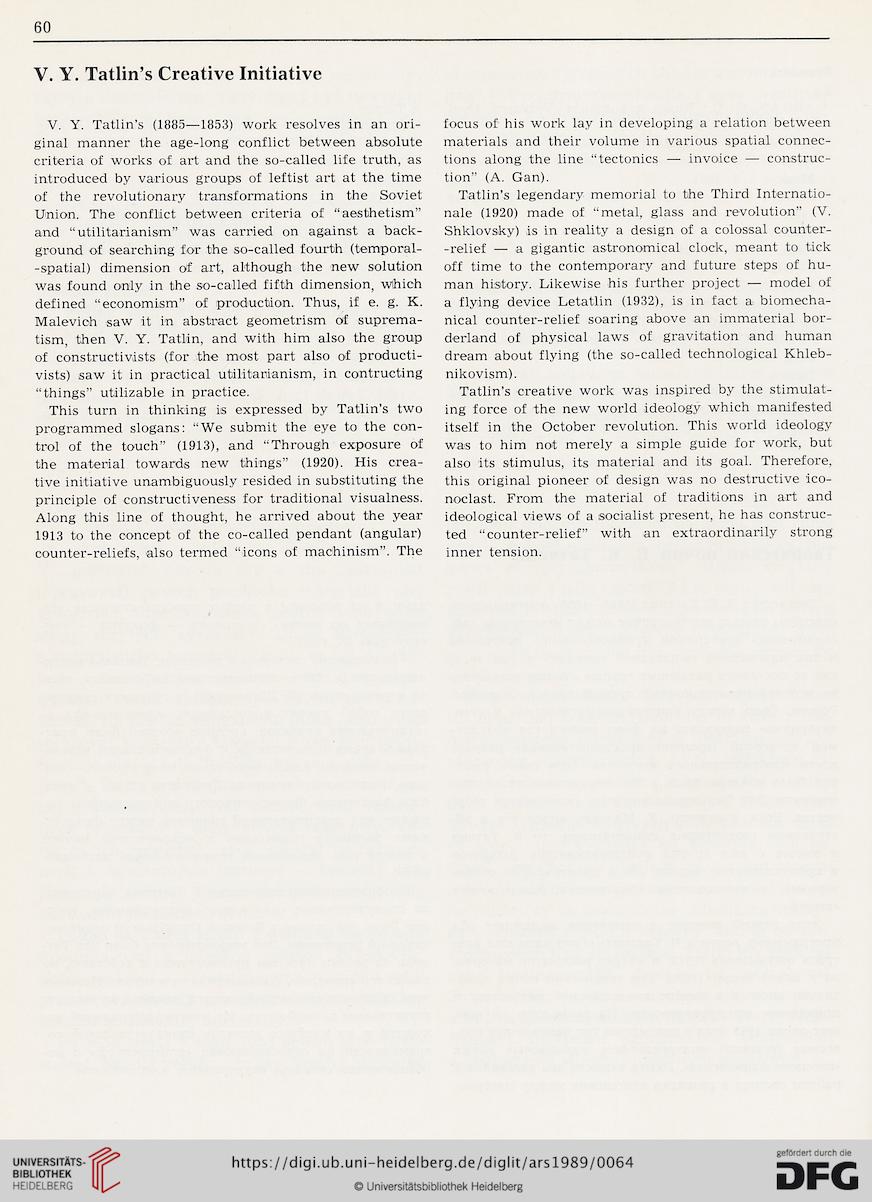 V. Y. Tatlin’s (1885—1853) Work résolves in an ori-
ginal männer the age-long conflict between absolute
criteria of Works of art and the so-called life truth, as
introduced by varions groups of leftist art at the time
of the revolutionary transformations in the Soviet
Union. The conflict between criteria of “aesthetism”
and “utilitarianism” was carried on against a back-
ground of searching for the so-called fourth (temporal-
-spatial) dimension of art, although the new solution
was found only in the so-called fifth dimension, wihich
defined “economism” of production. Thus, if e. g. K.
Malevich saw it in abstract geometrism of suprema-
tism, then V. Y. Tatlin, and with him also the group
of constructivists (for the most part also of producti-
vists) saw it in practical utilitarianism, in contructing
“things” utilizable in practice.
This turn in thinking is expressed by Tatlin’s two
programmed slogans: “We submit the eye to the con-
trol of the touch” (1913), and “Through exposure of
the material towards new things” (1920). His Crea-
tive initiative unambiguously resided in substituting the
principle of constructiveness for traditional visualness.
Along this line of thought, he arrived about the year
1913 to the concept of the co-called pendant (angular)
counter-reliefs, also termed “icons of machinism”. The

focus of his Work lay in developing a relation between
materials and their volume in various spatial connec-
tions along the line “tectonics — invoice — construc-
tion” (A. Gan).
Tatlin’s legendary memorial to the Third Internatio-
nale (1920) made of “metal, glass and révolution” (V.
Shklovsky) is in reality a design of a colossal counter-
-relief — a gigantic astronomical clock, meant to tick
off time to the Contemporary and future steps of hu-
man hisitory. Likewise his further project — model of
a flying device Letatlin (1932), is in fact a biomecha-
nical counter-relief soaring above an immaterial bor-
derland of physical laws of gravitation and human
dream about flying (the so-called technological Khleb-
nikovism).
Tatlin’s Creative work was inspired by the stimulat-
ing force of the new world ideology which manifested
itself in the October révolution. This world ideology
was to him not merely a simple guide for work, but
also its stimulus, its material and its goal. Therefore,
this original pioneer of design was no destructive ico-
noclast. From the material of traditions in art and
ideological views of a socialist present, he has construc-
ted “counter-relief” with an extraordinarily strong
inner tension.