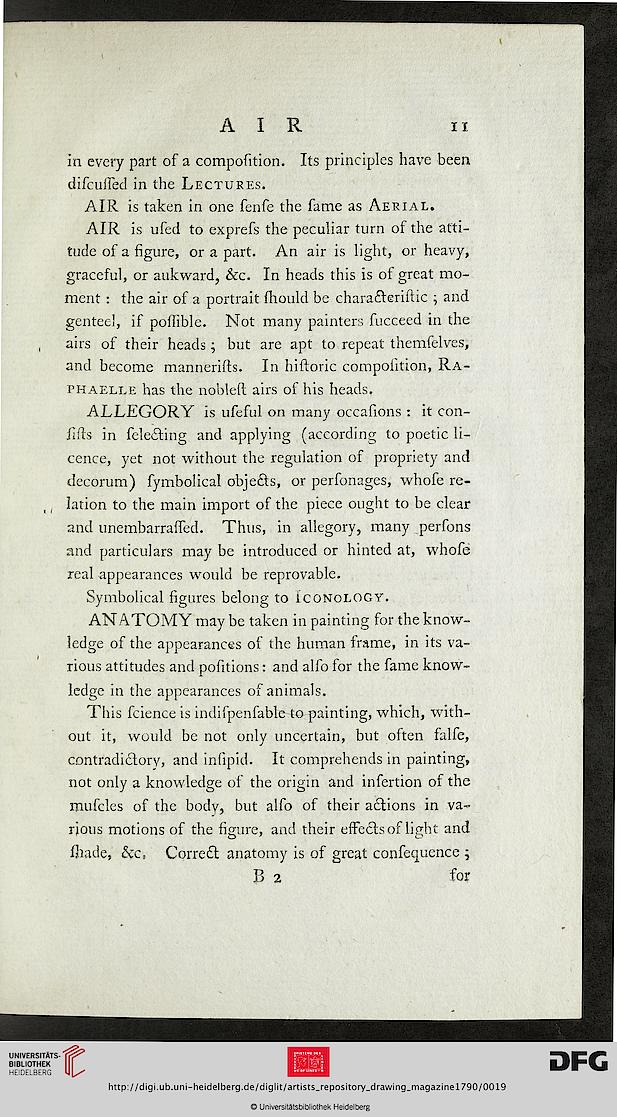 Information about OCR text
A I R

in every part of a compofition. Its principles have been
difcuffed in the Lectures.

AIR is taken in one fenfe the fame as Aerial.

AIR is ufed to exprefs the peculiar turn of the atti-
tude of a figure, or a part. An air is light, or heavy,
graceful, or aukward, &c. In heads this is of great mo-
ment : the air of a portrait mould be characleriftic ; and
genteel, if poflible. Not many painters fucceed in the
airs of their heads; but are apt to repeat themfelves,
and become mannerifts. In hiftoric compofition, Ra-
phaelle has the nobleft airs of his heads.

ALLEGORY is ufeful on many occafions : it con-
fifts in felecting and applying (according to poetic li-
cence, yet not without the regulation of propriety and
decorum) fymbolical objects, or perfonages, whofe re-
lation to the main import of the piece ought to be clear
and unembarrafTed. Thus, in allegory, many perfons
and particulars may be introduced or hinted at, whofe
real appearances would be reprovable.

This fcience is indifpenfable to-painting, which, with-
out it, would be not only uncertain, but often falfe,
contradictory, and infipid. It comprehends in painting,
not only a knowledge of the origin and infertion of the
mufcles of the body, but alfo of their actions in va-
rious motions of the figure, and their effects of light and
fhade, &c, Correct anatomy is of great conference ;