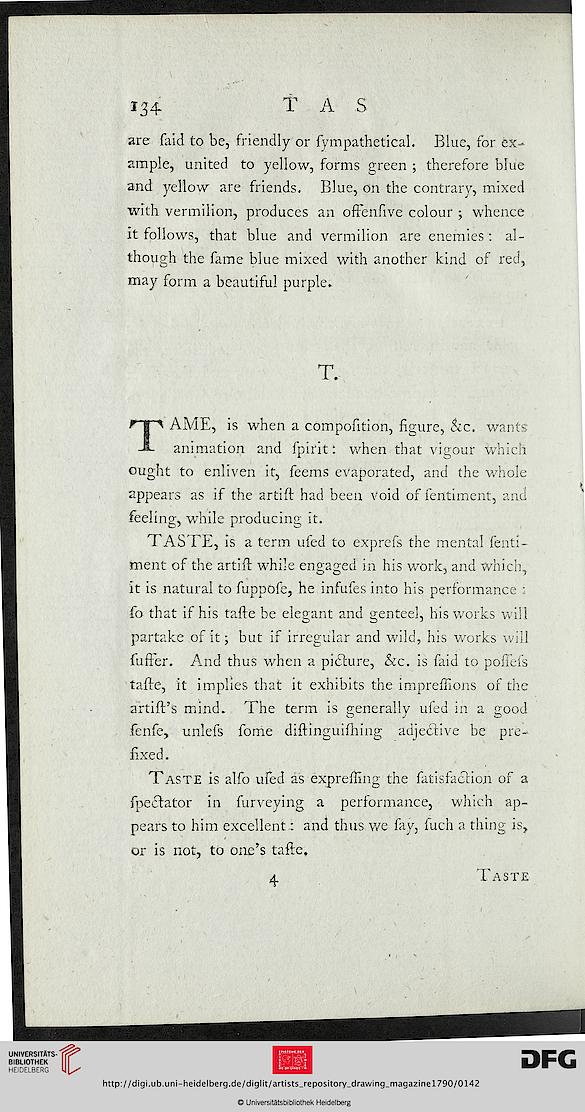 are faid to be, friendly or fympathetical. Blue, for ex-
ample, united to yellow, forms green ; therefore blue
and yellow are friends. Blue, on the contrary, mixed
with vermilion, produces an ofFenhve colour ; whence
it follows, that blue and vermilion are enemies: al-
though the fame blue mixed with another kind of red,
may form a beautiful purple.

TAME, is when a cOmpofition, figure, he. wants
animation and fpirit: when that vigour which
ought to enliven it, feems evaporated, and the whole
appears as if the artift had been void of fentiment, and
feeling, while producing it.

TASTE, is a term ufed to exprefs the mental fenti-
ment of the artift while engaged in his work, and which,
it is natural to fuppofe, he infufes into his performance ;
fo that if his tafte be elegant and genteel, his works will
partake of it; but if irregular and wild, his works will
fufFer. And thus when a picture, &c. is faid to poflefs
tafte, it implies that it exhibits the impreflions of the
airlift's mind. The term is generally ufed in a good
fenfe, unlefs fome diftinguifhing adjecYive be pre-
fixed.

Taste is alfo ufed as expreffing the fatisfacKon of a
fpectator in furveying a performance, which ap-
pears to him excellent: and thus we fay, fuch a thing is,
or is not, to one's tafte,