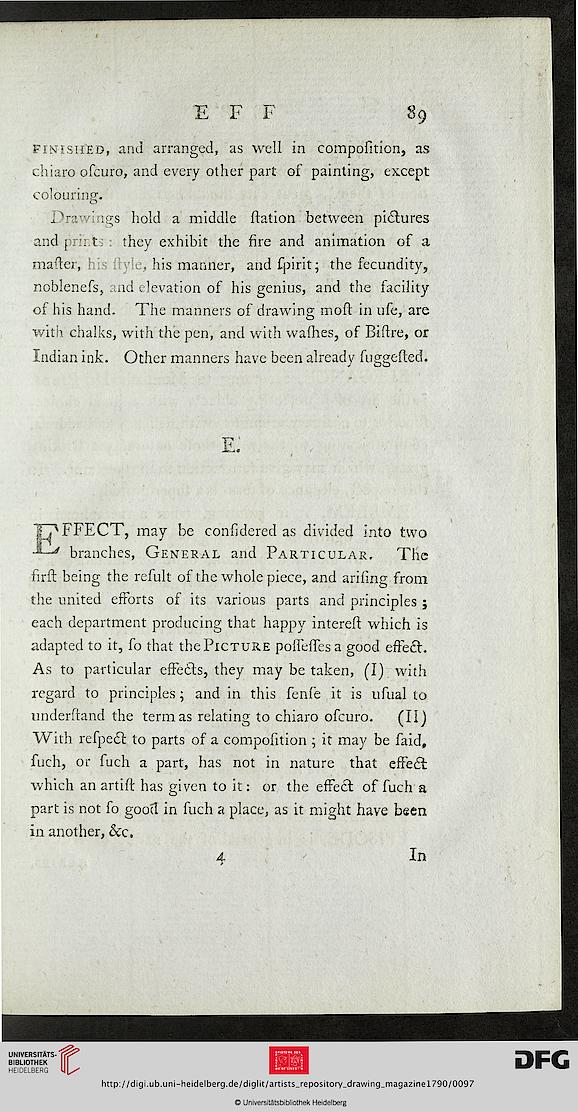 finished, and arranged, as well in compofition, as
chiaro ofcuro, and every other part of painting, except

ra •' tgs hold a middle ftation between pictures
and prints they exhibit the fire and animation of a
matter, his ftyle, his manner, andfpirit; the fecundity,
noblenefs, and elevation of his genius, and the facility
of his hand. The manners of drawing moft in ufe, are
with chalks, with the pen, and v/ith wafhes, of Biftre, or
Indian ink. Other manners have been already fuggefted.

TT^FFECT, may be confidered as divided into two
' branches, General and Particular. The
firft being the refult of the whole piece, and arifing from
the united efforts of its various parts and principles ;
each department producing that happy interefl which is
adapted to it, fo that the Picture pofTeffes a good effect.
As to particular effects, they may be taken, (I) with
regard to principles ; and in this fenfe it is ufual to
understand the term as relating to chiaro ofcuro. (II)
With refpecl: to parts of a compofition ; it may be faid,
fuch, or fuch a part, has not in nature that effect
which an artift has given to it: or the effect of fuch a
part is not fo good in fuch a place, as it might have been
in another, &c.