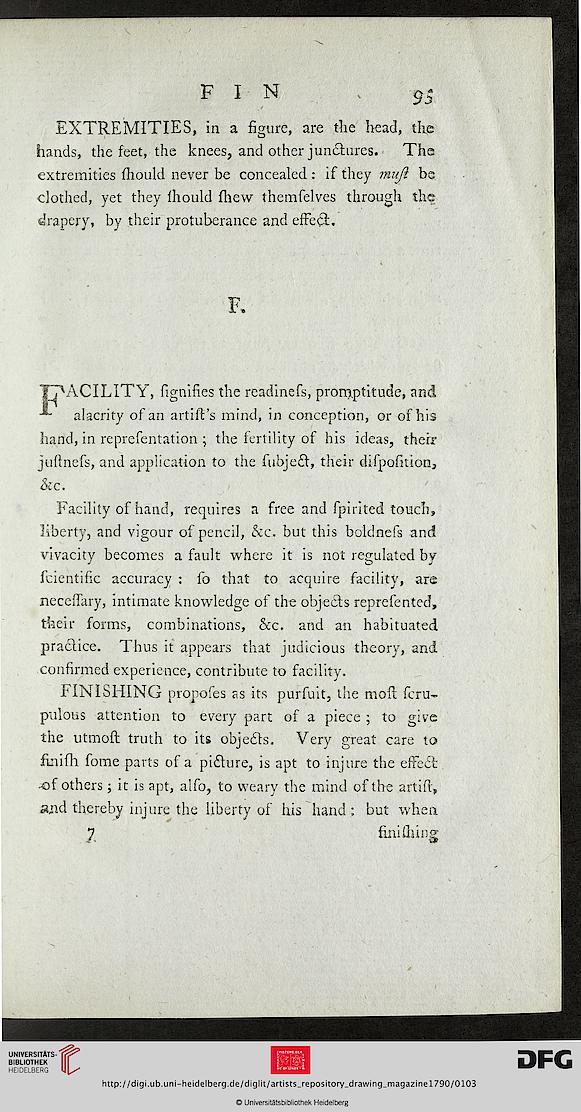 EXTREMITIES, in a figure, are the head, the
hands, the feet, the knees, and other junctures. The
extremities mould never be concealed : if they muji be
clothed, yet they ihould fhew themfelves through the
drapery, by their protuberance and effe<3:.

TpACILITY, fignifies the readinefs, promptitude, and
alacrity of an artift's mind, in conception, or of his
hand, in reprefentation ; the fertility of his ideas, their
juflnefs, and application to the fubject, their difpofition,
&c.

Facility of hand, requires a free and fpirited touch,
liberty, and vigour of pencil, &c. but this boldnefs and
vivacity becomes a fault where it is not regulated by
fcientific accuracy : fo that to acquire facility, are
neceffary, intimate knowledge of the objects reprefented,
their forms, combinations, &c. and an habituated
practice. Thus it appears that judicious theory, and
confirmed experience, contribute to facility.

FINISHING propofes as its purfuit, the moft fcru-
pulous attention to every part of a piece ; to give
the utmoft truth to its objects. Very great care to
finifh fome parts of a picture, is apt to injure the effect:
•of others; it is apt, alfo, to weary the mind of the artift,
and thereby injure the liberty of his hand ; but when
7 fini filing