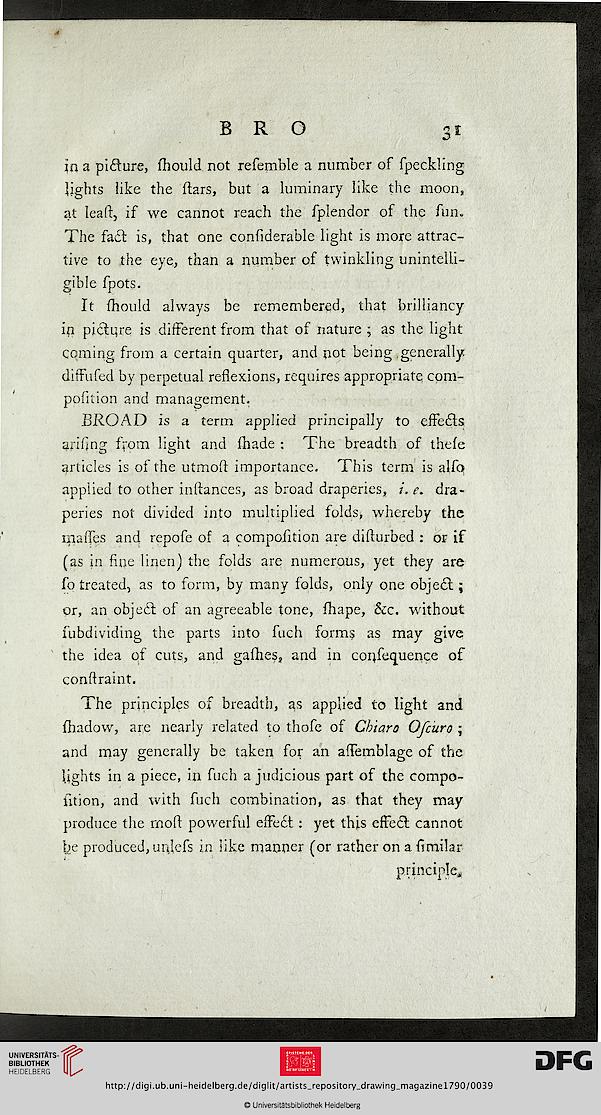 In a picture, fhould not refemble a number of fpeckling
lights like the ftars, but a luminary like the moon,
at leaft, if we cannot reach the fplendor of the fun.
The fact is, that one conficierable light is more attrac-
tive to the eye, than a number of twinkling unintelli-
gible fpots.

It mould always be remembered, that brilliancy
in picture is different from that of nature ; as the light
coming from a certain quarter, and not being generally
diffufed by perpetual reflexions, requires appropriate com-
pofkion and management.

BROAD is a term applied principally to effects
arifjng from light and fhade : The breadth of thefe
articles is of the utmoft importance. This term is alfq
applied to other inftances, as broad draperies, e. dra-
peries not divided into multiplied folds, whereby the
maffes and repofe of a composition are difturbed : or if
(as in fine linen) the folds are numerous, yet they are
fo treated, as to form, by many folds, only one object;
or, an objecl: of an agreeable tone, fhape, &c. without
fubdividing the parts into fuch forms as may give
the idea of cuts, and games, and in confequence of
conftraint.

The principles of breadth, as applied to light and
fhadow, are nearly related to thofe of Ch'iaro Qfcuro ;
and may generally be taken for an aflfemblage of the
lights in a piece, in fuch a judicious part of the compo-
fition, and with fuch combination, as that they may
produce the rnofl powerful effect: yet this effect: cannot
fee produced, unjefs in like manner (or rather on a fimilar