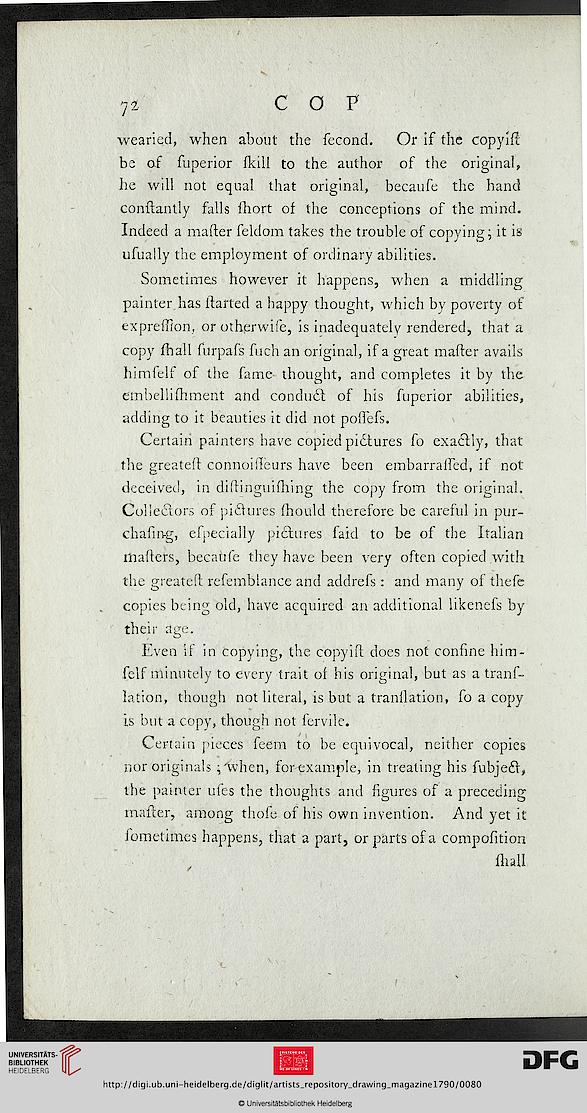 wearied, when about the fecond. Or if the copyifl
be of fuperior fkill to the author of the original,
he will not equal that original, becaufe the hand
conftantly falls fhort of the conceptions of the mind.
Indeed a mafter feldom takes the trouble of copying; it is
ufually the employment of ordinary abilities.

Sometimes however it happens, when a middling
painter has ftarted a happy thought, which by poverty of
expreffion, or otherwife, is inadequately rendered, that a
copy fhall furpafs fuch an original, if a great mafter avails
himfelf of the fame thought, and completes it by the
embellifhment and conduct of his fuperior abilities,
adding to it beauties it did not poffefs.

Certain painters have copied pictures fo exactly, that
the greateft connoifleurs have been embarrafTed, if not
deceived, in diftinguifhing the copy from the original.
Collectors of pictures mould therefore be careful in pur-
chasing, efpecially pictures faid to be of the Italian
matters, becaufe they have been very often copied with
the greateft refemblance and addrefs : and many of thefe
copies being old, have acquired an additional likenefs by
their age.

Even if in copying, the copy id does not confine him-
felf minutely to every trait of his original, but as a tranf-
lation, though not literal, is but a tranllation, fo a copy
is but a copy, though not fervile.

Certain pieces ieem to be equivocal, neither copies
nor originals ;'when, for example, in treating his fubject,
the painter ufes the thoughts and figures of a preceding
mafter, among thofe of his own invention. And yet it
fometimes happens, that a part, or parts of a compofition