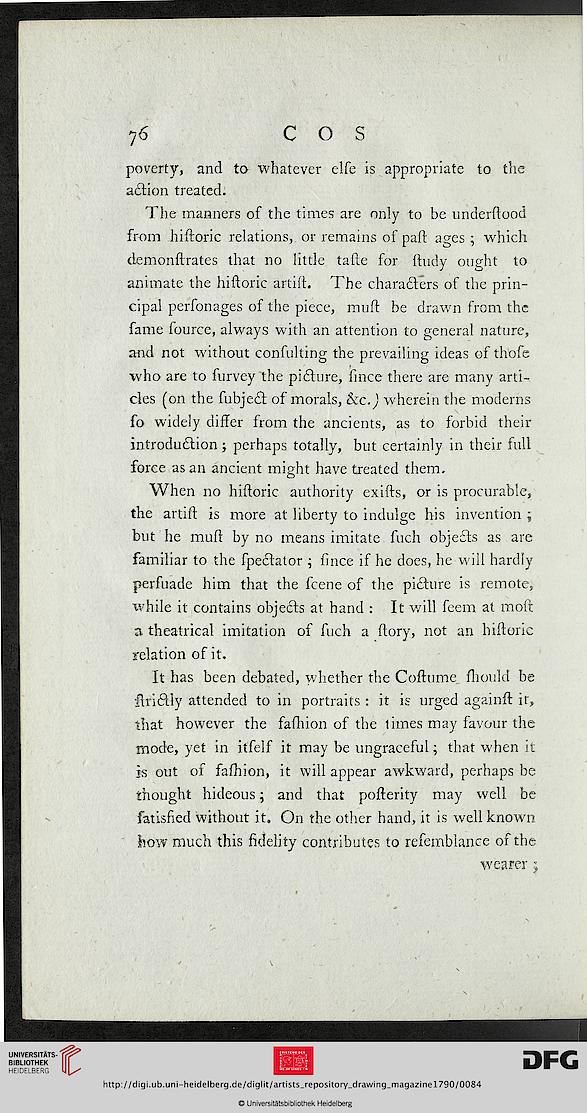 Information about OCR text
j6 COS

poverty, and to whatever elfe is appropriate to the
action treated.

The manners of the times are only to be underftood
from hiftoric relations, or remains of paft ages ; which
demonftrates that no little tafte for ftudy ought to
animate the hiftoric artift. The characters of the prin-
cipal perfonages of the piece, muff be drawn from the
fame fource, always with an attention to general nature,
and not without confulting the prevailing ideas of thofe
who are to furvey the pi dure, fmce there are many arti-
cles (on the fubject of morals, &c.j wherein the moderns
fo widely differ from the ancients, as to forbid their
introduction; perhaps totally, but certainly in their full
force as an ancient might have treated them.

When no hiftoric authority exifts, or is procurable,
the artift is more at liberty to indulge his invention ;
but he muft by no means imitate fuch objects as are
familiar to the fpeclator ; fince if he does, he will hardly
perfuade him that the fcene of the picture is remote,
while it contains objects at hand : It will feem at moft
a theatrical imitation of fuch a ftory, not an hiftoric
relation of it.

It has been debated, whether the Coftume. mould be
ftrictly attended to in portraits : it is urged againft ir,
that however the fafhion of the times may favour the
mode, yet in itfelf it may be ungraceful; that when it
is out of fafhion, it will appear awkward, perhaps be
thought hideous; and that pofterity may well be
fatished without it. On the other hand, it is well known
how much this fidelity contributes to refemblance of the