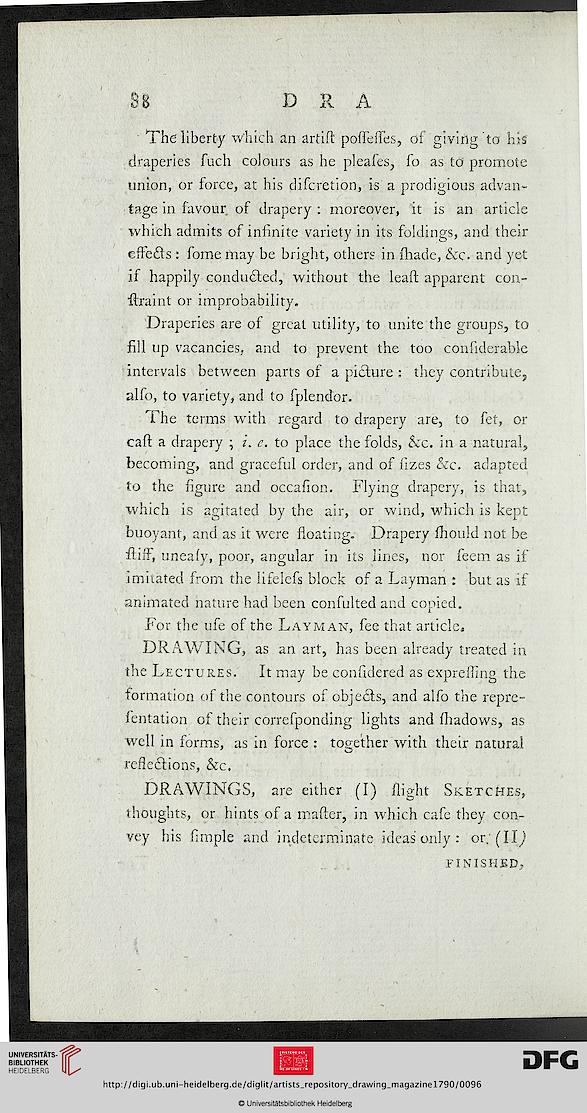 The liberty which an artilr. poffefTes, of giving "to hk
draperies fuch colours as he pleafes, fo as to promote
union, or force, at his difcretion, is a prodigious advan-
tage in favour of drapery : moreover, it is an article
which admits of infinite variety in its foldings, and their
effedts : fome may be bright, others in made, &o and yet
if happily conducted, without the lean; apparent con-
ftraint or improbability.

Draperies are of great utility, to unite the groups, to
fill up vacancies, and to prevent the too confiderable
intervals between parts of a picture : they contribute,
alfo, to variety, and to fplendor.

The terms with regard to drapery are, to fet, or
call: a drapery ; I. e. to place the folds, &c. in a natural,
becoming, and graceful order, and of fizes he. adapted
to the figure and occafion. Flying drapery, is that,
which is agitated by the air, or wind, which is kept
buoyant, and as it were floating. Drapery Ihould not be
ft iff, uneafy, poor, angular in its lines, nor feem as if
imitated from the lifelefs block of a Layman : but as if
animated nature had been confulted and copied.

For the ufe of the Layman, fee that article*

DRAWING, as an art, has been already treated in
the Lectures. It may be confidered as expreffing the
formation of the contours of objects, and alfo the repre-
fentation of their correfponding lights and Ihadows, as
well in forms, as in force : together with their natural
reflections, &c.

DRAWINGS, are either (I) flight Sketches,
thoughts, or hints of a matter, in which cafe they con-
vey his fimple and indeterminate ideas'only : or. (Ilj