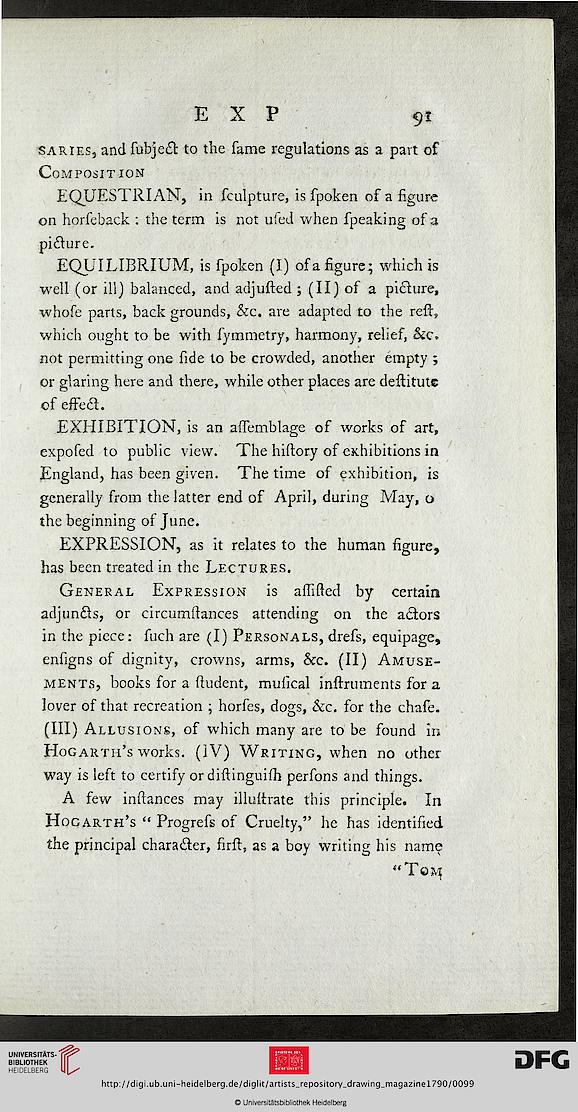 saries, and fubjecl: to the fame regulations as a part of
Composition

EQUESTRIAN, in fculpture, is fpoken of a figure
on horfeback : the term is not ufed when fpeaking of a
picture.

EQUILIBRIUM, is fpoken (I) of a figure; which is
well (or ill) balanced, and adjufted ; (II) of a picture,
whofe parts, back grounds, &c. are adapted to the reft,
which ought to be with fymmetry, harmony, relief, &c.
not permitting one fide to be crowded, another empty ;
or glaring here and there, while other places are deftitute
of effect.

EXHIBITION, is an affemblage of works of art,
expofed to public view. The hiftory of exhibitions in
England, has been given. The time of exhibition, is
generally from the latter end of April, during May, o
the beginning of June.

EXPRESSION, as it relates to the human figure,
has been treated in the Lectures.

General Expression is affifted by certain
adjuncts, or circumftances attending on the actors
in the piece: fuch are (I) Personals, drefs, equipage,
enfigns of dignity, crowns, arms, Sec. (II) Amuse-
ments, books for a ftudent, mulical inftruments for a
lover of that recreation ; horfes, dogs, &c. for the chafe.
(Ill) Allusions, of which many are to be found in
Hogarth's works. (IV) Writing, when no other
way is left to certify or diftinguifh perfons and things.

A few inftances may illultrate this principle. In
Hogarth's " Progrefs of Cruelty," he has identified
the principal character, firft, as a boy writing his name