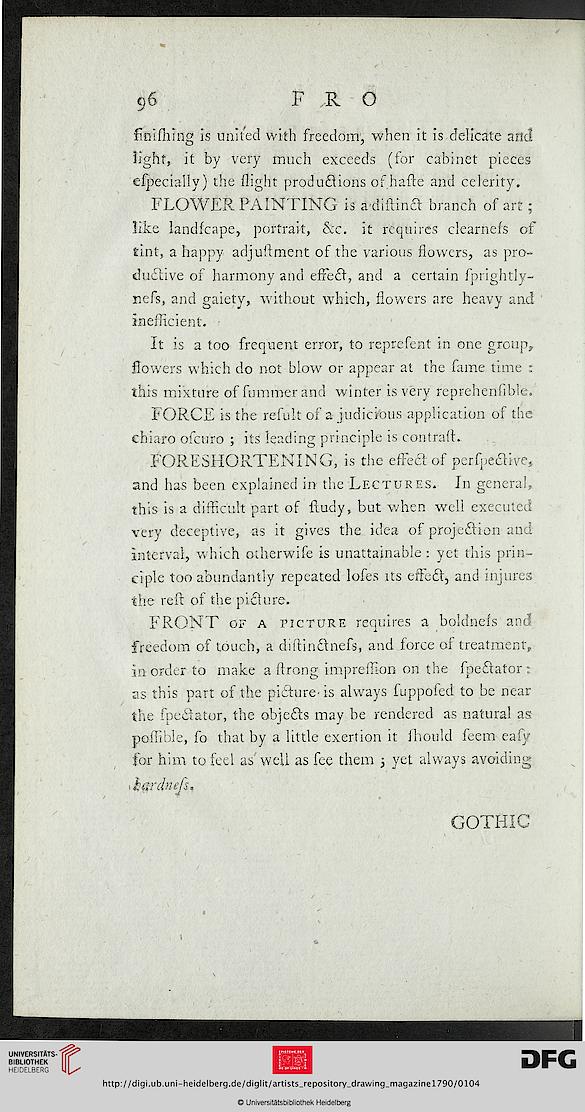 finifhing is united with freedom, when it is delicate and
light, it by very much exceeds (for cabinet pieces
efpecially) the flight productions of hafte and celerity.

FLOWER PAINTING is a diftind branch of art;
like landfcape, portrait, &c. it requires clearnefs of
tint, a happy adjuftment of the various flowers, as pro-
ductive of harmony and effect, and a certain fprightly-
nefs, and gaiety, without which, flowers are heavy and
inefficient. -

It is a too frequent error, to reprcfent in one group,
flowers which do not blow or appear at the fame time :
this mixture of fummer and winter is very reprehenfible.

FORCE is the refult of a judicious application of the
chiaro ofcuro ; its leading principle is contraft.

FORESHORTENING, is the effect of perfpedtive,
and has been explained in the Lectures. In general,
this is a difficult part of ftudy, but when well executed
very deceptive, as it gives the idea of projection and
interval, which otherwife is unattainable : yet this prin-
ciple too abundantly repeated lofes its effect, and injures
the reft of the picture.

FRONT of a picture requires a boldnefs and
freedom of touch, a diftinctnefs, and force of treatment,
in order to make a ftrong imprefllon on the fpectator :
as this part of the picture-is always fuppofed to be near
the fpectator, the objects may be rendered as natural as
poffible, fo that by a little exertion it fhould feem eafy
for him to feel as'well as fee them ; yet always avoiding