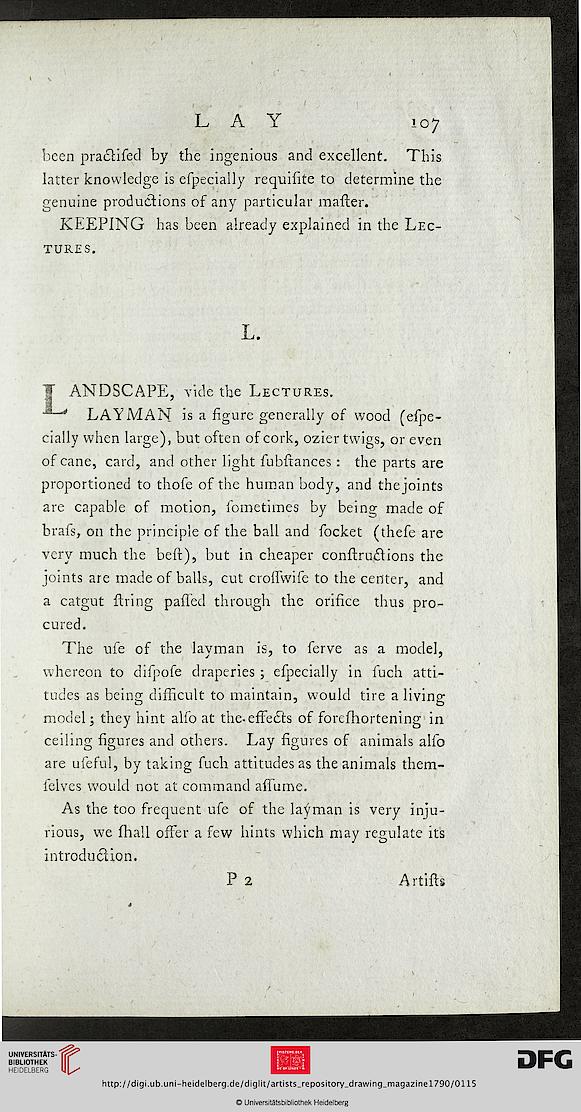 been pra&ifed by the ingenious and excellent. This
latter knowledge is efpecially requifite to determine the
genuine productions of any particular mafter.

KEEPING has been already explained in the Lec-
tures.

LAYMAN is a figure generally of wood (efpe-
cially when large), but often of cork, ozier twigs, or even
of cane, card, and other light fubftances: the parts are
proportioned to thofe of the human body, and thejoints
are capable of motion, fometimes by being made of
brafs, on the principle of the ball and focket (thefe are
very much the beft), but in cheaper conductions the
joints are made of balls, cut croffwife to the center, and
a catgut ftring paffed through the orifice thus pro-
cured.

The ufe of the layman is, to ferve as a model,
whereon to difpofe draperies ; efpecially in fuch atti-
tudes as being difficult to maintain, would tire a living
model; they hint alfo at the-effects of forefhortening in
ceiling figures and others. Lay figures of animals alfo
are ufeful, by taking fuch attitudes as the animals them-
felves would not at command affume.

As the too frequent ufe of the layman is very inju-
rious, we fhall offer a few hints which may regulate its
introduction.