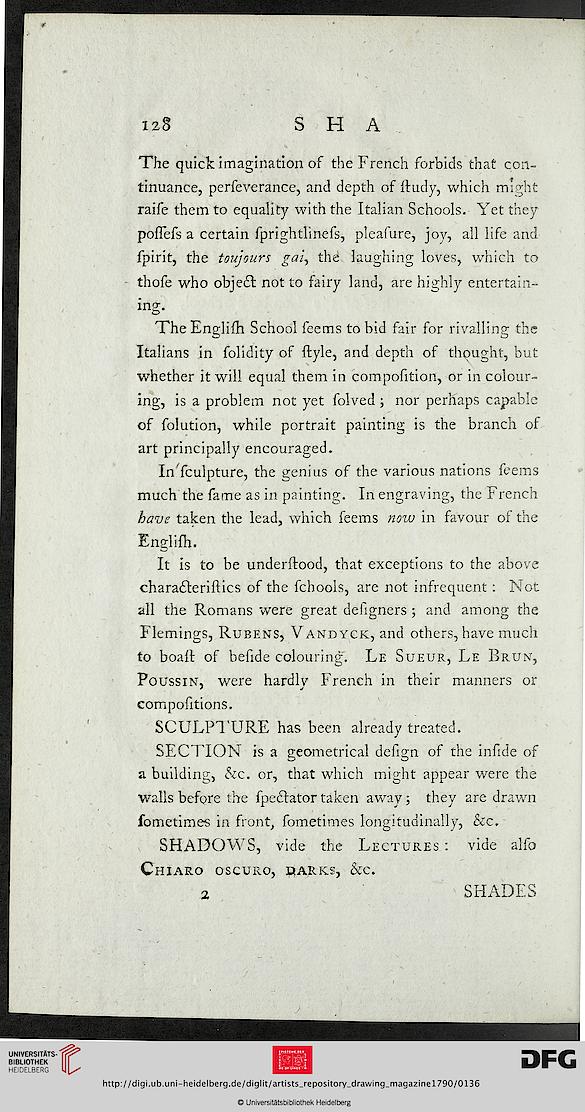 The quick imagination of the French forbids that con-
tinuance, perfeverance, and depth of ftudy, which might
raife them to equality with the Italian Schools. Yet they
pofTefs a certain fprightlinefs, pleafure, joy, all life and
fpirit, the toujours gai, the laughing loves, which to
thofe who object not to fairy land, are highly entertain-
ing.

TheEnglifh School feems to bid fair for rivalling the
Italians in folidity of ftyle, and depth of thought, but
whether it will equal them in compofition, or in colour-
ing, is a problem not yet folved; nor perhaps capable
of folution, while portrait painting is the branch of
art principally encouraged.

In'fculpture, the genius of the various nations feems
much the fame as in painting. In engraving, the French
have taken the lead, which feems now in favour of the
Englifh.

It is to be underftood, that exceptions to the above
chara£leriftics of the fchools, are not infrequent: Not
all the Romans were great defigners ; and among the
Flemings, Rubens, Vandyck, and others, have much
to boaft of befide colouring. Le Sueur, Le Brun,
Poussin, were hardly French in their manners or
compofitions.

SCULPTURE has been already treated.

SECTION is a geometrical defign of the infide of
a building, &c. or, that which might appear were the
walls before the fpe£f ator taken away; they are drawn
fometimes in front, fometimes longitudinally, &c