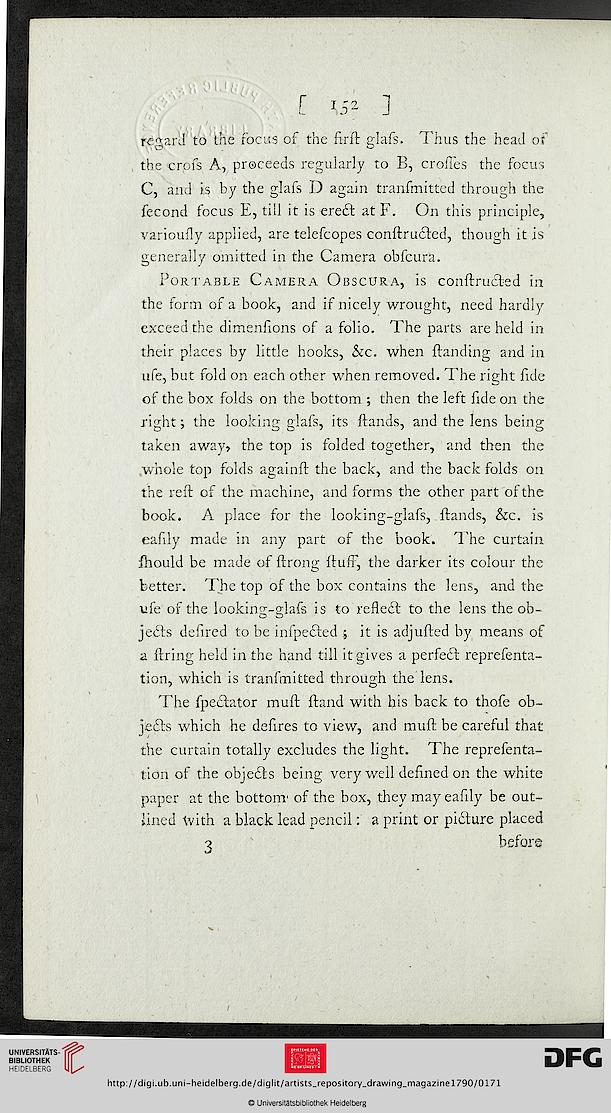 regard to the focus of the firft glafs. Thus the head of
the crcfs A, proceeds regularly to B, crofTes the focus
C, and is by the glafs D again tranfmitted through the
fecond focus E, till it is erect: at F. On this principle,
varioufly applied, are telefcopes conftrufted, though it is
generally omitted in the Camera obfcura.

Portable Camera Obscura, is conftructed in
the form of a book, and if nicely wrought, need hardly
exceed the dimenfions of a folio. The parts are held in
their places by little hooks, &c. when {landing and in
life, but fold on each other when removed. The right fide
of the box folds on the bottom ; then the left fide on the
right; the looking glafs, its ftands, and the lens being
taken away, the top is folded together, and then the
whole top folds againft the back, and the back folds on
the reft of the machine, and forms the other part of the
book. A place for the looking-glafs,. ftands, &c. is
eafily made in any part of the book. The curtain
mould be made of ftrong ftufr, the darker its colour the
better. The top of the box contains the lens, and the
ufe of the lookino;-2;lafs is to reflecl" to the lens the ob-
jecls defired to be infpecled ; it is adjufled by means of
a firing held in the hand till it gives a perfecf reprefenta-
tion, which is tranfmitted through the lens.

The fpecfator muft ftand with his back to thofe ob-
jects which he defires to view, and muft be careful that
the curtain totally excludes the light. The reprefenta-
tion of the objecls being very well defined on the white
paper at the bottom' of the box, they may eafily be out-
lined with a black lead pencil: a print or picture placed