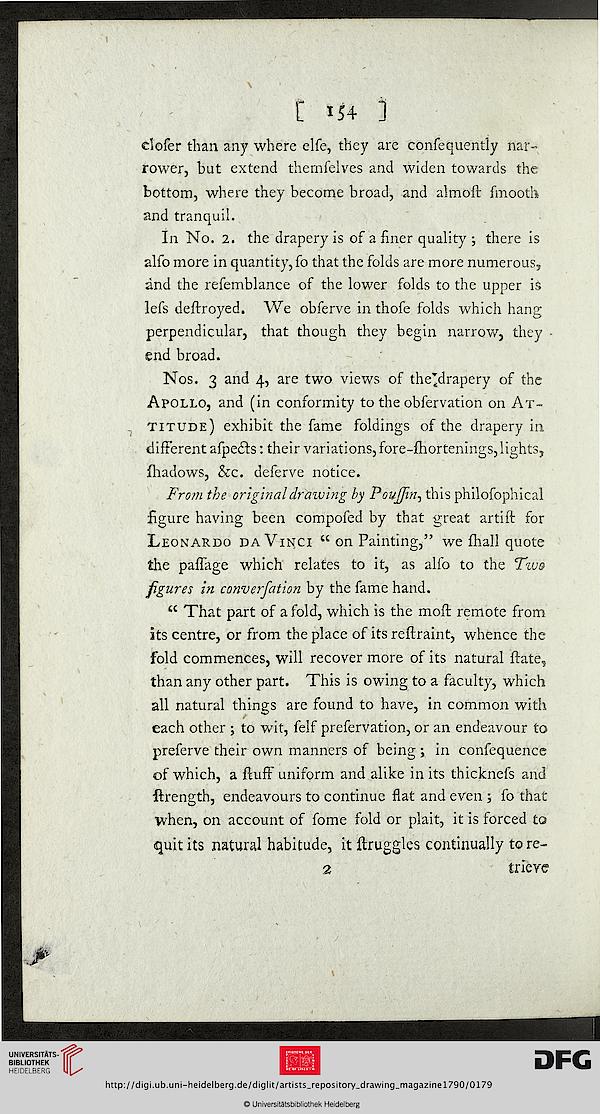 clofcr than any where elfe, they are confequently nar-
rower, but extend themfelves and widen towards the
bottom, where they become broad, and almoft fmooth
and tranquil.

In No. 2. the drapery is of a finer quality ; there is
alfo more in quantity, fo that the folds are more numerous,
and the refemblance of the lower folds to the upper is
lefs defer oyed. We obferve in thofe folds which hang
perpendicular, that though they begin narrow, they
end broad.

Nos. 3 and 4, are two views of the'drapery of the
Apollo, and (in conformity to the obfervation on At-
titude) exhibit the fame foldings of the drapery in
different afpe&s: their variations, fore-fhortenings, lights,
fhadows, &c. deferve notice.

From the original drawing by PouJJin-, this philofophical
figure having been compofed by that great artift for
Leonardo da Vinci " on Painting," we mall quote
the pafTage which relates to it, as alfo to the Two
figures in conversation by the fame hand.

" That part of a fold, which is the moft remote from
its centre, or from the place of its reftraint, whence the
fold commences, will recover more of its natural ftate,
than any other part. This is owing to a faculty, which
all natural things are found to have, in common with
each other ; to wit, felf prefervation, or an endeavour to
preferve their own manners of being; in confequence
of which, a fluff uniform and alike in its thicknefs and
ftrength, endeavours to continue flat and even ; fo that
when, on account of fome fold or plait, it is forced to
quit its natural habitude, it ftruggles continually tore-