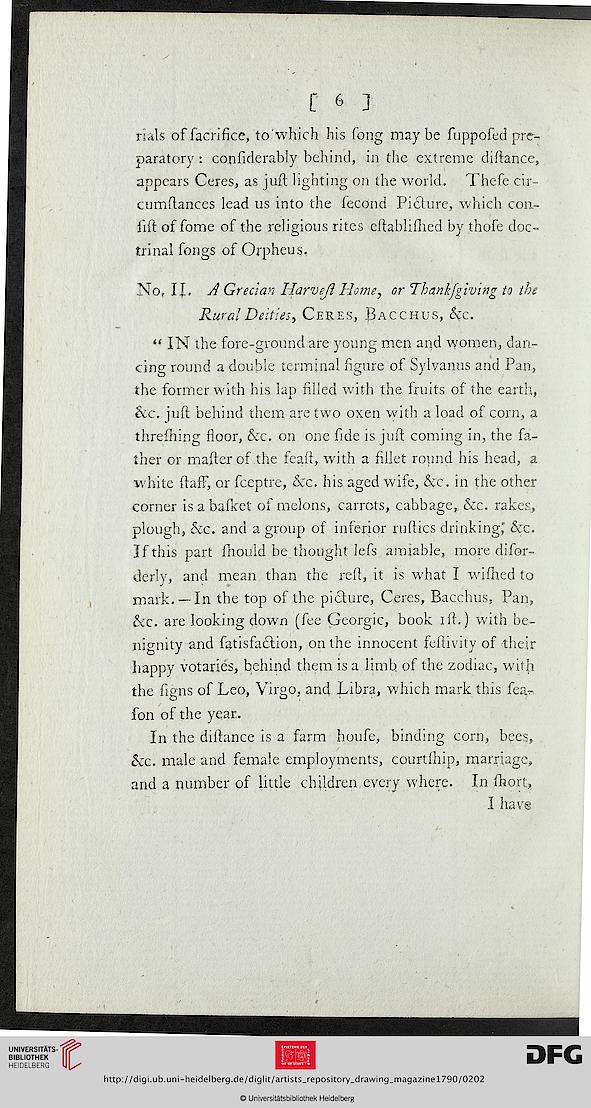 rials of facrifice, to which his fong maybe fuppofed pre-
paratory : corifiderably behind, in the extreme diftance,
appears Ceres, as juft lighting on the world. Thefe cir-
cumftances lead us into the fecond Picture, which con-
iift of fome of the religious rites eftablifhed by thofe doc-
trinal fongs of Orpheus.

No, II. A Grecian Harvejl Home, or Thank/giving to the
Rural Deities, Ceres, Bacchus, &c.

" IN the fore-ground are young men and women, dan-
cing round a double terminal figure of Sylvanus and Pan,
the former with his lap filled with the fruits of the earth,
&c. juft behind them are two oxen with a load of corn, a
threfhing floor, &c. on one fide is juft coming in, the fa-
ther or mafter of the feaft, with a fillet round his head, a
white ftafF, or fceptre, &c. his aged wife, &c. in the other
corner is a bafket of melons, carrots, cabbage, &c. rakes,
plough, &c. and a group of inferior nifties drinking,' &c.
Jf this part fhould be thought lefs amiable, more difor-
derly, and mean than the reft, it is what I wifhed to
mark. —In the top of the picture, Ceres, Bacchus, Pan,
&c. are looking down (fee Georgic, book ift.) with be-
nignity and fatisfa£tion, on the innocent feftivity of their
happy votaries, behind them is a limb of the zodiac, with
the figns of Leo, Virgo, and Libra, which mark this fea-
fon of the year.

In the diftance is a farm houfe, binding corn, bees,
&c. male and female employments, courtfhip, marriage,
and a number of little children every where. In fhort,