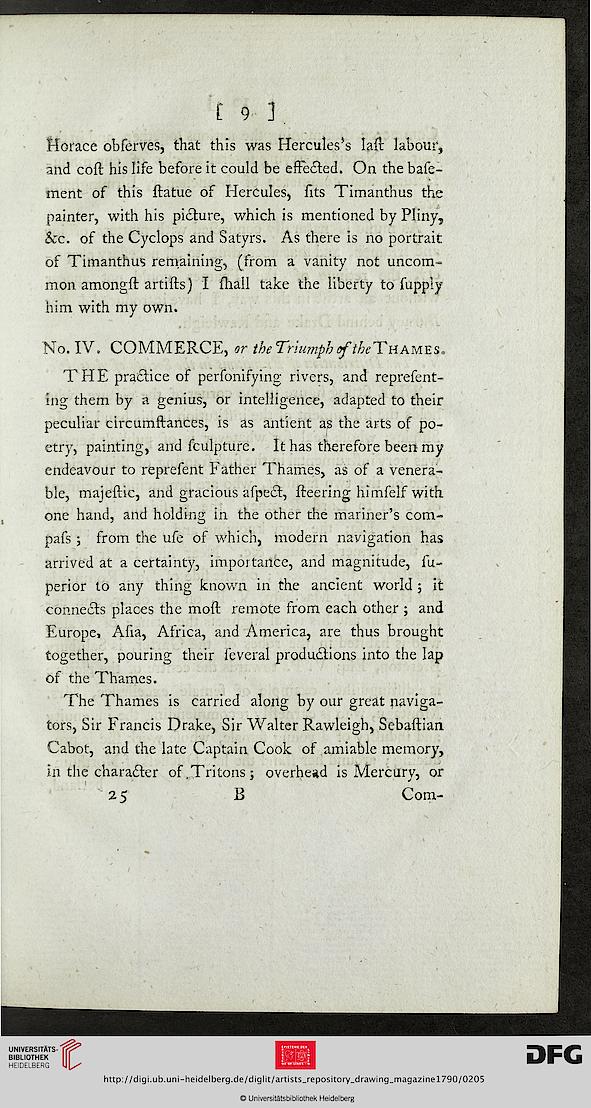 Horace obferves, that this was Hercules's laft. labour,
and coft his life before it could be effected. On the bafe-
ment of this ftatue of Hercules, fits Timanthus the
painter, with his picture, which is mentioned by Pliny,
Sec. of the Cyclops and Satyrs. As there is no portrait
of Timanthus remaining, (from a vanity not uncom-
mon amongft artifts) I fhali take the liberty to fuppiy
him with my own.

THE practice of perfonifying rivers, and reprefent-
ing them by a genius, or intelligence, adapted to their
peculiar circumftances, is as antient as the arts of po-
etry, painting, and fculpture. It has therefore been my
endeavour to reprefent Father Thames, as of a venera-
ble, majeftic, and gracious afpect, fteering himfelf with
one hand, and holding in the other the mariner's com-
pafs; from the ufe of which, modern navigation has
arrived at a certainty, importance, and magnitude, fu-
perior to any thing known in the ancient world j it
connects places the moft remote from each other ; and
Europe, Afia, Africa, and America, are thus brought
together, pouring their feveral productions into the lap
of the Thames.

The Thames is carried along by our great naviga-
tors, Sir Francis Drake, Sir Walter Rawleigh, Sebaftian
Cabot, and the late Captain Cook of amiable memory,
in the character of . Tritons; overhead is Mercury, or
25 B Com-