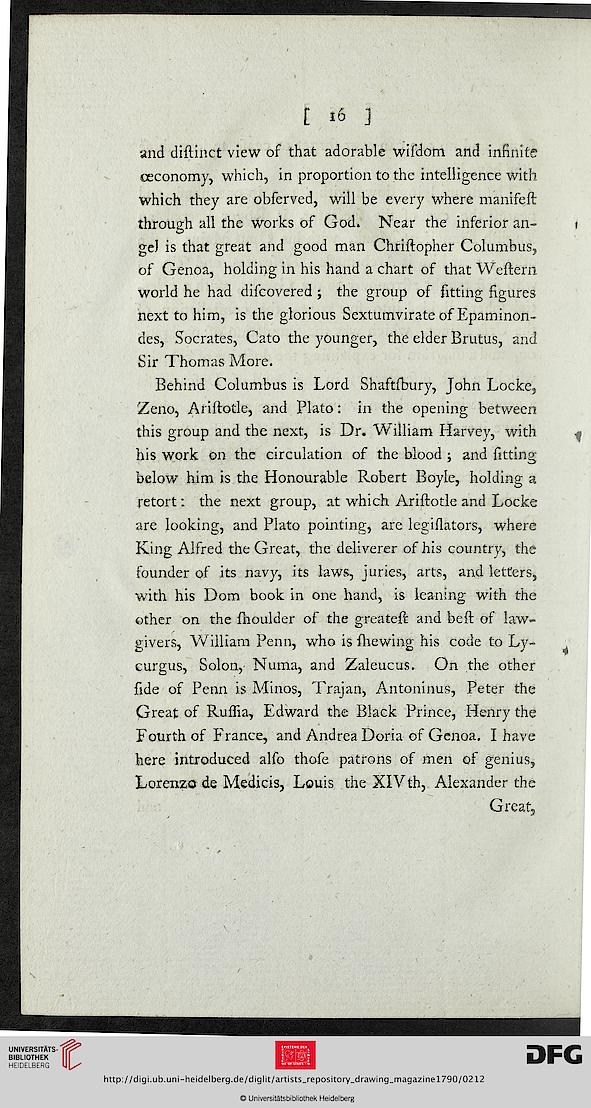 Information about OCR text
[ i« 1

and diftinct view of that adorable wifdom and infinite
ceconomy, which, in proportion to the intelligence with
which they are obferved, will be every where manifeft
through all the works of God. Near the inferior an-
gel is that great and good man Chriftopher Columbus,
of Genoa, holding in his hand a chart of that Weftern
world he had difcovered ; the group of fitting figures
next to him, is the glorious Sextumvirate of Epaminon-
des, Socrates, Cato the younger, the elder Brutus, and
Sir Thomas More.

Behind Columbus is Lord Shaftfbury, John Locke.,
Zeno, Ariftotle, and Plato: in the opening between
this group and the next, is Dr. William Harvey, with
his work on the circulation of the blood ; and fitting
below him is the Honourable Robert Boyle, holding a
retort: the next group, at which Ariftotle and Locke
are looking, and Plato pointing, are legiflators, where
King Alfred the Great, the deliverer of his country, the
founder of its navy, its laws, juries, arts, and letters,
with his Dom book in one hand, is leaning with the
other on the fnoulder of the greateft and beft of law-
givers, William Penn, who is mewing his code to Ly-
curgus, Solon, Numa, and Zaleucus. On the other
fide of Penn is Minos, Trajan, Antoninus, Peter the
Great of Ruflia, Edward the Black Prince, Henry the
Fourth of France, and Andrea Doria of Genoa. I have
here introduced alfo thofe patrons of men of genius,
Lorenzo de Medicis, Louis the XIVth, Alexander the