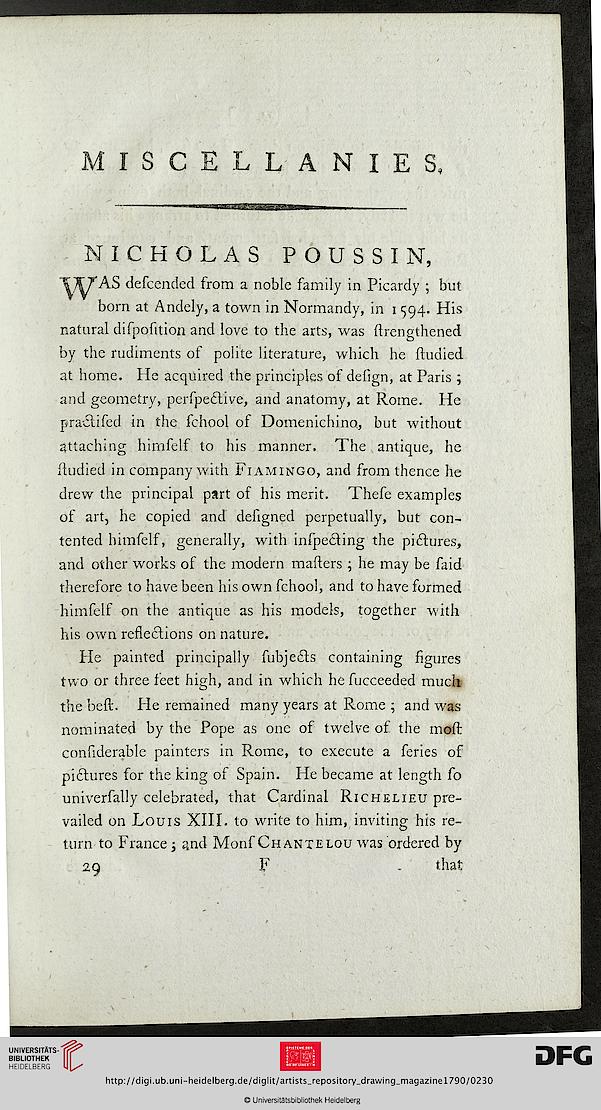 "^^AS defcended from a noble family in Picardy ; but
born at Andely, a town in Normandy, in i 594. His
natural difpofition and love to the arts, was ftrengthened
by the rudiments of polite literature, which he ftudied
at home. He acquired the principles of defign, at Paris ;
and geometry, perfpeclive, and anatomy, at Rome. He
practifed in the fchool of Domenichino, but without
attaching himfelf to his manner. The antique, he
ftudied in company with Fiamingo, and from thence he
drew the principal part of his merit. Thefe examples
of art, he copied and defigned perpetually, but con-
tented himfelf, generally, with infpecling the pictures,
and other works of the modern matters ; he may be faid
therefore to have been his own fchool, and to have formed
himfelf on the antique as his models, together -with
his own reflections on nature.

He painted principally fubjects containing figures
two or three feet high, and in which he fucceeded much
the befl. He remained many years at Rome ; and was
nominated by the Pope as one of twelve of the moffc
confiderable painters in Rome, to execute a feries of
pictures for the king of Spain. He became at length fo
univerfally celebrated, that Cardinal Richelieu pre-
vailed on Louis XIII. to write to him, inviting his re-
turn to France; and Monf Chantelou was ordered by