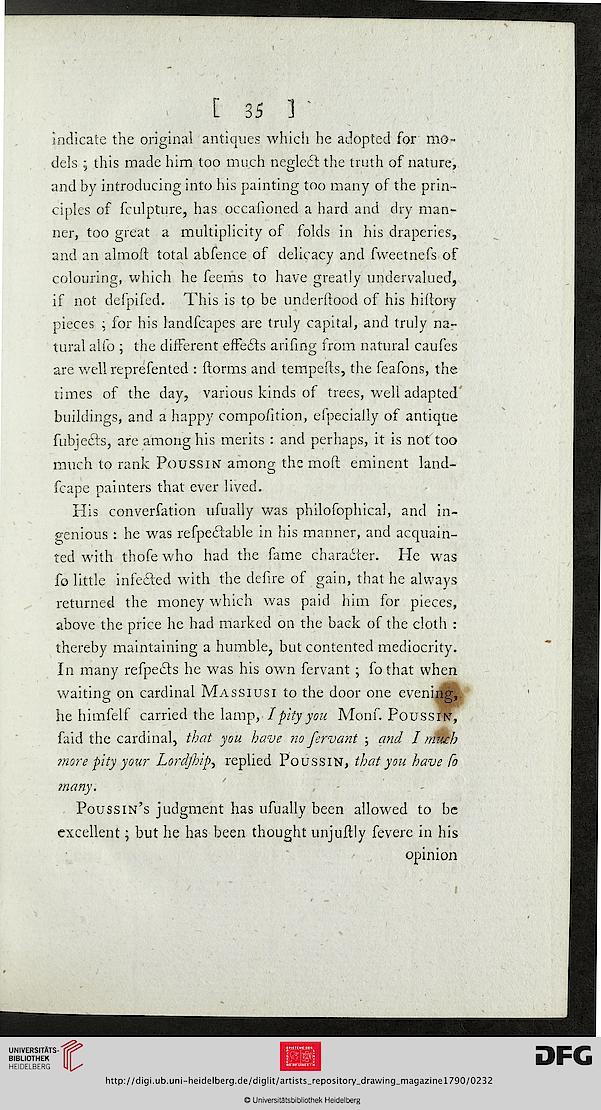 indicate the original antiques which he adopted for mo-
dels ; this made him too much neglect the truth of nature,
and by introducing into his painting too many of the prin-
ciples of fculpture, has occafioned a hard and dry man-
ner, too great a multiplicity of folds in his draperies,
and an almoft total abfence of delicacy and fweetnefs of
colouring, which he feems to have greatly undervalued,
if not defpifed. This is tp be underftood of his hiftory
pieces ; for his landfcapes are truly capital, and truly na-
tural alfo ; the different effects arifirig from natural caufes
are well reprefented : ftorms and tempefts, the feafons, the
times of the day, various kinds of trees, well adapted
buildings, and a happy compofition, efpecially of antique
fubjecTis, are among his merits : and perhaps, it is not too
much to rank Poussin among the moft eminent land-
fcape painters that ever lived.

His converfation ufually was philofophical, and in-
genious : he was refpectable in his manner, and acquain-
ted with thofe who had the fame character. He was
fo little infected with the defire of gain, that he always
returned the money which was paid him for pieces,
above the price he had marked on the back of the cloth :
thereby maintaining a humble, but contented mediocrity.
In many refpecls he was his own fervant; fo that when
waiting on cardinal Massiusi to the door one evening,
he himfelf carried the lamp, I pity you Monf. PoussM,
faid the cardinal, that you have no fervant ; and I mikh
more pity your Lordjhip, replied PoussiN, that you have fo
?nany. .

Poussin's judgment has ufually been allowed to be
excellent; but he has been thought unjuftly fevere in his