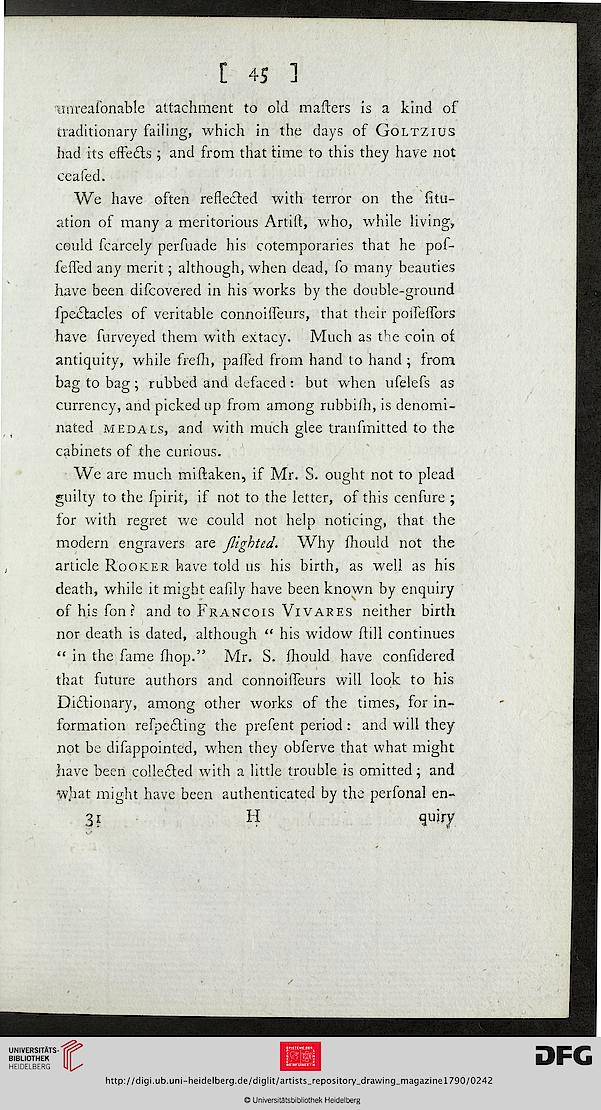 anreafonable attachment to old mafters is a kind of
traditionary failing, which in the days of Goltzius
had its effects ; and from that time to this they have not
ceafed.

We have often reflected with terror on the fitu-
ation of many a meritorious Artift, who, while living?
could fcarcely perfuade his cotemporaries that he pof-
feffed any merit 5 although, when dead, fo many beauties
have been difcovered in his works by the double-ground
fpectacles of veritable connoifleurs, that their poiTeffors
have furveyed them with extacy. Much as the coin of
antiquity, while frefh, paffed from hand to hand ; from
bag to bag ; rubbed and defaced : but when ufelefs as
currency, and picked up from among rubbilh, is denomi-
nated medals, and with much glee tranfmitted to the
cabinets of the curious.

We are much miftaken, if Mr. S. ought not to plead
guilty to the fpirit, if not to the letter, of this cenfure ;
for with regret we could not help noticing, that the
modern engravers are flighted. Why fhould not the
article Rooker have told us his birth, as well as his
death, while it might eafdy have been known by enquiry
of his fon ? and to Francois Vivares neither birth
nor death is dated, although " his widow mil continues
" in the fame fhop." Mr. S. mould have confidered
that future authors and connoiffeurs will look to his
Dictionary, among other works of the times, for in-
formation refpedting the prefent period : and will they
not be difappointed, when they obferve that what might
have been collected with a little trouble is omitted; and
what might have been authenticated by the perfonal en-
31 H quijy