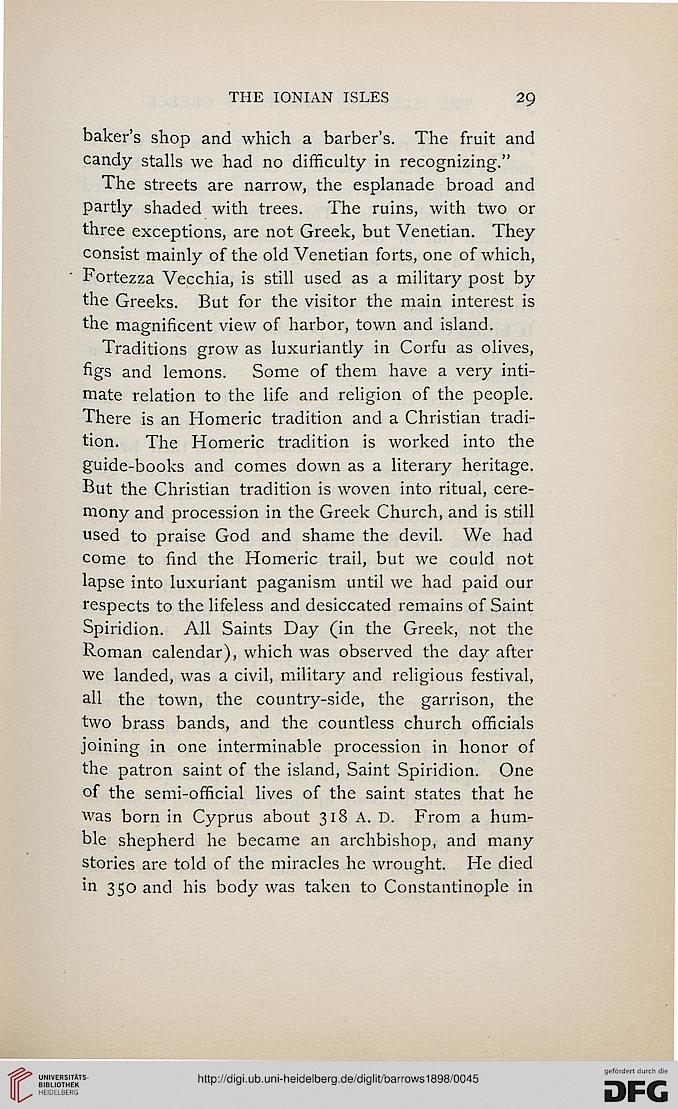 baker's shop and which a barber's. The fruit and
candy stalls we had no difficulty in recognizing."

The streets are narrow, the esplanade broad and
partly shaded with trees. The ruins, with two or
three exceptions, are not Greek, but Venetian. They
consist mainly of the old Venetian forts, one of which,
Fortezza Vecchia, is still used as a military post by
the Greeks. But for the visitor the main interest is
the magnificent view of harbor, town and island.

Traditions grow as luxuriantly in Corfu as olives,
figs and lemons. Some of them have a very inti-
mate relation to the life and religion of the people.
There is an Homeric tradition and a Christian tradi-
tion. The Homeric tradition is worked into the
guide-books and comes down as a literary heritage.
But the Christian tradition is woven into ritual, cere-
mony and procession in the Greek Church, and is still
used to praise God and shame the devil. We had
come to find the Homeric trail, but we could not
lapse into luxuriant paganism until we had paid our
respects to the lifeless and desiccated remains of Saint
Spiridion. All Saints Day (in the Greek, not the
Roman calendar), which was observed the day after
we landed, was a civil, military and religious festival,
all the town, the country-side, the garrison, the
two brass bands, and the countless church officials
joining in one interminable procession in honor of
the patron saint of the island, Saint Spiridion. One
of the semi-official lives of the saint states that he
was born in Cyprus about 318 A. D. From a hum-
ble shepherd he became an archbishop, and many
stories are told of the miracles he wrought. He died
in 350 and his body was taken to Constantinople in