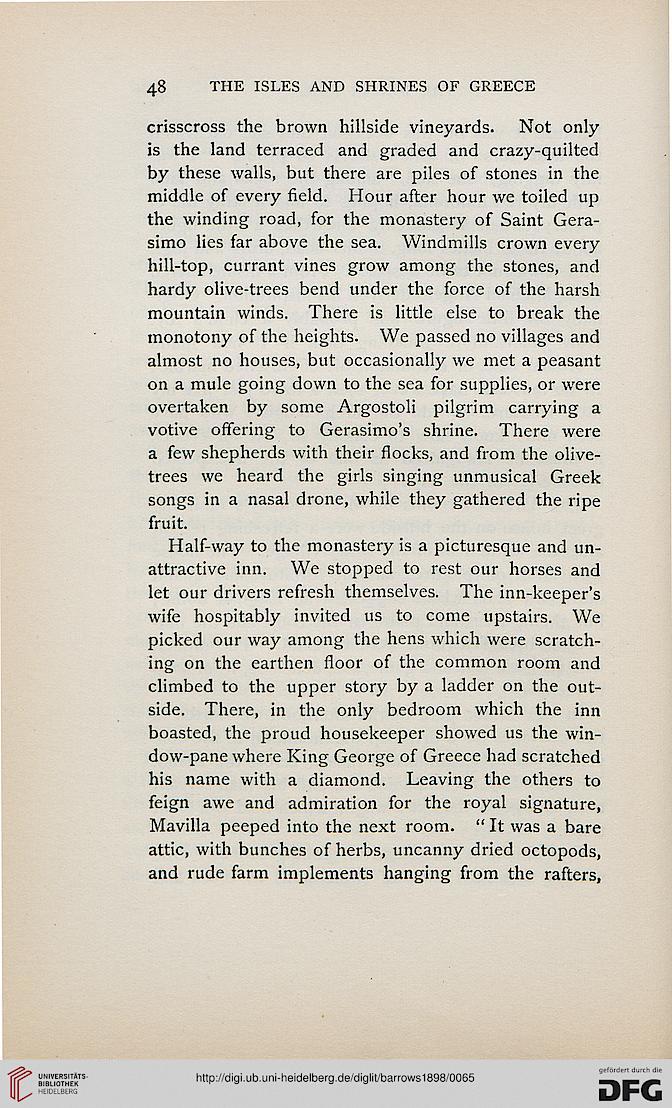 Information about OCR text
48 THE ISLES AND SHRINES OF GREECE

crisscross the brown hillside vineyards. Not only
is the land terraced and graded and crazy-quilted
by these walls, but there are piles of stones in the
middle of every field. Hour after hour we toiled up
the winding road, for the monastery of Saint Gera-
simo lies far above the sea. Windmills crown every
hill-top, currant vines grow among the stones, and
hardy olive-trees bend under the force of the harsh
mountain winds. There is little else to break the
monotony of the heights. We passed no villages and
almost no houses, but occasionally we met a peasant
on a mule going down to the sea for supplies, or were
overtaken by some Argostoli pilgrim carrying a
votive offering to Gerasimo's shrine. There were
a few shepherds with their flocks, and from the olive-
trees we heard the girls singing unmusical Greek
songs in a nasal drone, while they gathered the ripe
fruit.

Half-way to the monastery is a picturesque and un-
attractive inn. We stopped to rest our horses and
let our drivers refresh themselves. The inn-keeper's
wife hospitably invited us to come upstairs. We
picked our way among the hens which were scratch-
ing on the earthen floor of the common room and
climbed to the upper story by a ladder on the out-
side. There, in the only bedroom which the inn
boasted, the proud housekeeper showed us the win-
dow-pane where King George of Greece had scratched
his name with a diamond. Leaving the others to
feign awe and admiration for the royal signature,
Mavilla peeped into the next room. " It was a bare
attic, with bunches of herbs, uncanny dried octopods,
and rude farm implements hanging from the rafters,