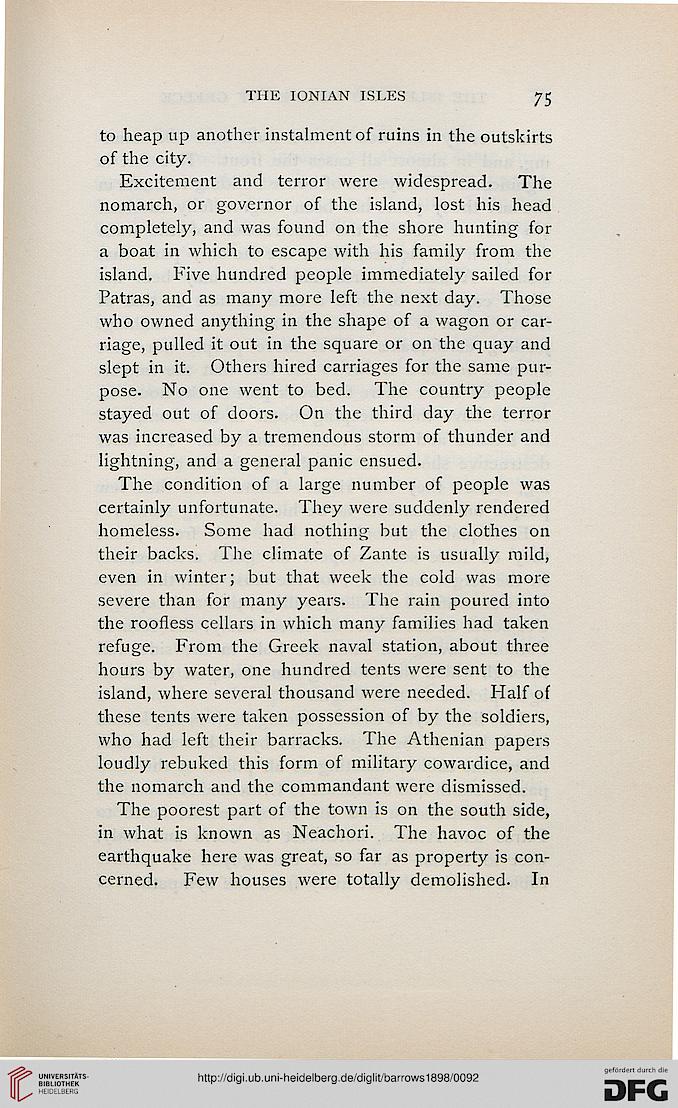 to heap up another instalment of ruins in the outskirts
of the city.

Excitement and terror were widespread. The
nomarch, or governor of the island, lost his head
completely, and was found on the shore hunting for
a boat in which to escape with his family from the
island. Five hundred people immediately sailed for
Patras, and as many more left the next day. Those
who owned anything in the shape of a wagon or car-
riage, pulled it out in the square or on the quay and
slept in it. Others hired carriages for the same pur-
pose. No one went to bed. The country people
stayed out of doors. On the third day the terror
was increased by a tremendous storm of thunder and
lightning, and a general panic ensued.

The condition of a large number of people was
certainly unfortunate. They were suddenly rendered
homeless. Some had nothing but the clothes on
their backs. The climate of Zante is usually mild,
even in winter; but that week the cold was more
severe than for many years. The rain poured into
the roofless cellars in which many families had taken
refuge. From the Greek naval station, about three
hours by water, one hundred tents were sent to the
island, where several thousand were needed. Half of
these tents were taken possession of by the soldiers,
who had left their barracks. The Athenian papers
loudly rebuked this form of military cowardice, and
the nomarch and the commandant were dismissed.

The poorest part of the town is on the south side,
in what is known as Neachori. The havoc of the
earthquake here was great, so far as property is con-
cerned. Few houses were totally demolished. In