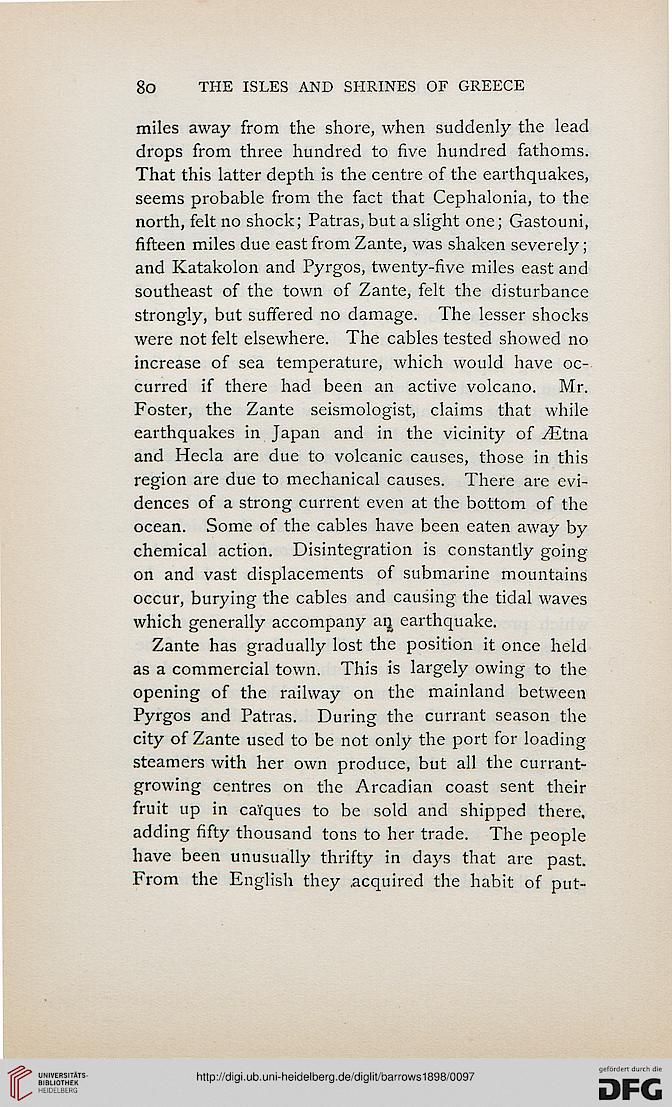 Information about OCR text
80 THE ISLES AND SHRINES OF GREECE

miles away from the shore, when suddenly the lead
drops from three hundred to five hundred fathoms.
That this latter depth is the centre of the earthquakes,
seems probable from the fact that Cephalonia, to the
north, felt no shock; Patras,but a slight one; Gastouni,
fifteen miles due east from Zante, was shaken severely;
and Katakolon and Pyrgos, twenty-five miles east and
southeast of the town of Zante, felt the disturbance
strongly, but suffered no damage. The lesser shocks
were not felt elsewhere. The cables tested showed no
increase of sea temperature, which would have oc-
curred if there had been an active volcano. Mr.
Foster, the Zante seismologist, claims that while
earthquakes in Japan and in the vicinity of ^Etna
and Hecla are due to volcanic causes, those in this
region are due to mechanical causes. There are evi-
dences of a strong current even at the bottom of the
ocean. Some of the cables have been eaten away by
chemical action. Disintegration is constantly going
on and vast displacements of submarine mountains
occur, burying the cables and causing the tidal waves
which generally accompany aij earthquake.

Zante has gradually lost the position it once held
as a commercial town. This is largely owing to the
opening of the railway on the mainland between
Pyrgos and Patras. During the currant season the
city of Zante used to be not only the port for loading
steamers with her own produce, but all the currant-
growing centres on the Arcadian coast sent their
fruit up in caiques to be sold and shipped there,
adding fifty thousand tons to her trade. The people
have been unusually thrifty in days that are past.
From the English they acquired the habit of put-