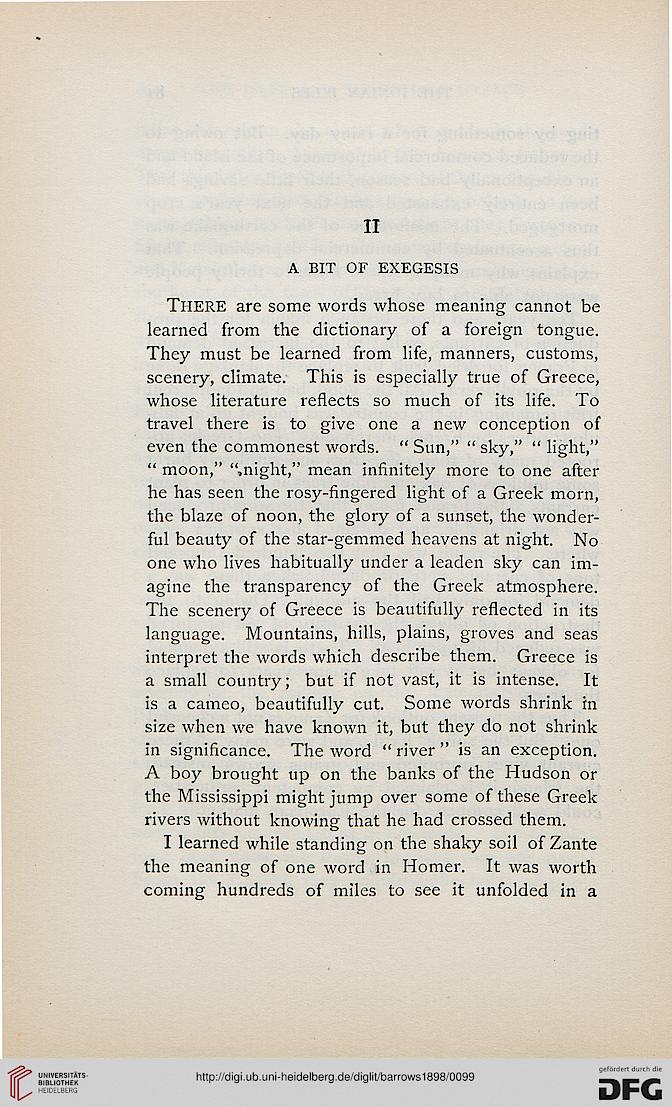 A BIT OF EXEGESIS

THERE are some words whose meaning cannot be
learned from the dictionary of a foreign tongue.
They must be learned from life, manners, customs,
scenery, climate. This is especially true of Greece,
whose literature reflects so much of its life. To
travel there is to give one a new conception of
even the commonest words. " Sun," " sky," " light,"
" moon," ".night," mean infinitely more to one after
he has seen the rosy-fingered light of a Greek morn,
the blaze of noon, the glory of a sunset, the wonder-
ful beauty of the star-gemmed heavens at night. No
one who lives habitually under a leaden sky can im-
agine the transparency of the Greek atmosphere.
The scenery of Greece is beautifully reflected in its
language. Mountains, hills, plains, groves and seas
interpret the words which describe them. Greece is
a small country; but if not vast, it is intense. It
is a cameo, beautifully cut. Some words shrink in
size when we have known it, but they do not shrink
in significance. The word " river " is an exception.
A boy brought up on the banks of the Hudson or
the Mississippi might jump over some of these Greek
rivers without knowing that he had crossed them.

I learned while standing on the shaky soil of Zante
the meaning of one word in Homer. It was worth
coming hundreds of miles to see it unfolded in a