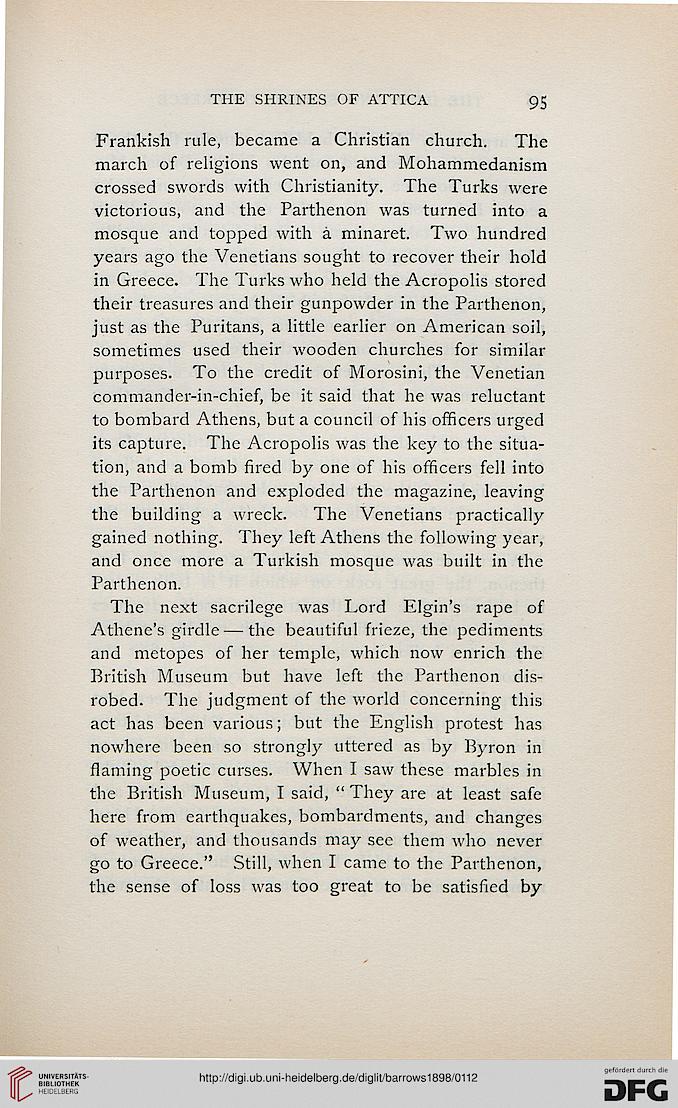 Information about OCR text
THE SHRINES OF ATTICA 95

Frankish rule, became a Christian church. The
march of religions went on, and Mohammedanism
crossed swords with Christianity. The Turks were
victorious, and the Parthenon was turned into a
mosque and topped with a minaret. Two hundred
years ago the Venetians sought to recover their hold
in Greece. The Turks who held the Acropolis stored
their treasures and their gunpowder in the Parthenon,
just as the Puritans, a little earlier on American soil,
sometimes used their wooden churches for similar
purposes. To the credit of Morosini, the Venetian
commander-in-chief, be it said that he was reluctant
to bombard Athens, but a council of his officers urged
its capture. The Acropolis was the key to the situa-
tion, and a bomb fired by one of his officers fell into
the Parthenon and exploded the magazine, leaving
the building a wreck. The Venetians practically
gained nothing. They left Athens the following year,
and once more a Turkish mosque was built in the
Parthenon.

The next sacrilege was Lord Elgin's rape of
Athene's girdle — the beautiful frieze, the pediments
and metopes of her temple, which now enrich the
British Museum but have left the Parthenon dis-
robed. The judgment of the world concerning this
act has been various; but the English protest has
nowhere been so strongly uttered as by Byron in
flaming poetic curses. When I saw these marbles in
the British Museum, I said, " They are at least safe
here from earthquakes, bombardments, and changes
of weather, and thousands may sec them who never
go to Greece." Still, when I came to the Parthenon,
the sense of loss was too great to be satisfied by