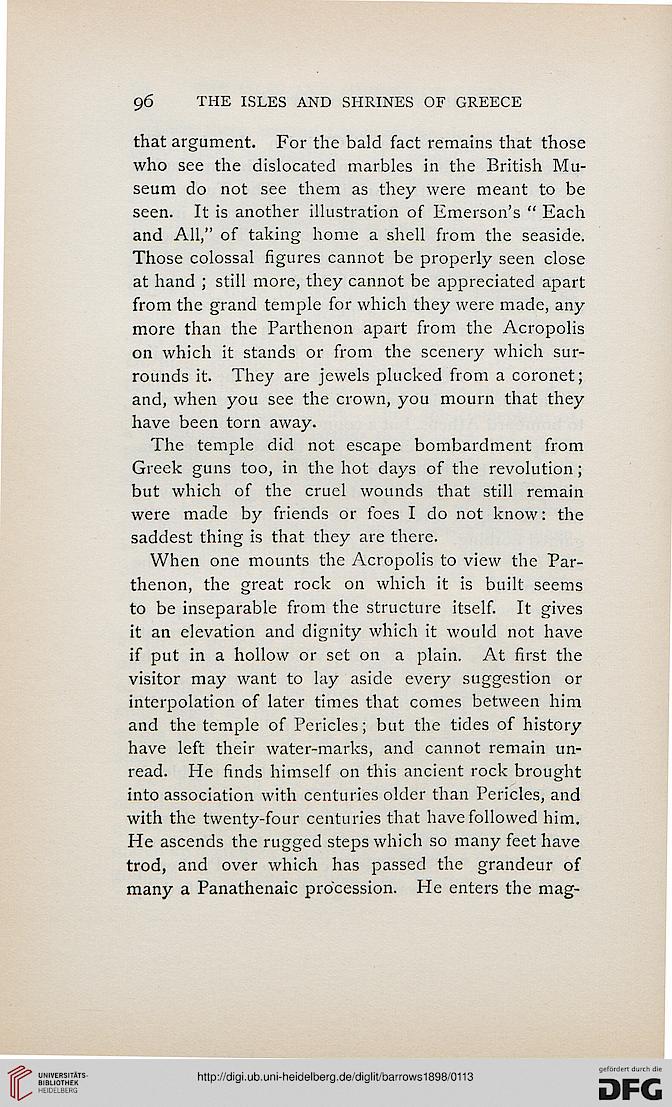 Information about OCR text
g6 THE ISLES AND SHRINES OF GREECE

that argument. For the bald fact remains that those
who see the dislocated marbles in the British Mu-
seum do not see them as they were meant to be
seen. It is another illustration of Emerson's " Each
and All," of taking home a shell from the seaside.
Those colossal figures cannot be properly seen close
at hand ; still more, they cannot be appreciated apart
from the grand temple for which they were made, any
more than the Parthenon apart from the Acropolis
on which it stands or from the scenery which sur-
rounds it. They are jewels plucked from a coronet;
and, when you see the crown, you mourn that they
have been torn away.

The temple did not escape bombardment from
Greek guns too, in the hot days of the revolution;
but which of the cruel wounds that still remain
were made by friends or foes I do not know: the
saddest thing is that they are there.

When one mounts the Acropolis to view the Par-
thenon, the great rock on which it is built seems
to be inseparable from the structure itself. It gives
it an elevation and dignity which it would not have
if put in a hollow or set on a plain. At first the
visitor may want to lay aside every suggestion or
interpolation of later times that comes between him
and the temple of Pericles; but the tides of history
have left their water-marks, and cannot remain un-
read. He finds himself on this ancient rock brought
into association with centuries older than Pericles, and
with the twenty-four centuries that have followed him.
He ascends the rugged steps which so many feet have
trod, and over which has passed the grandeur of
many a Panathenaic procession. He enters the mag-