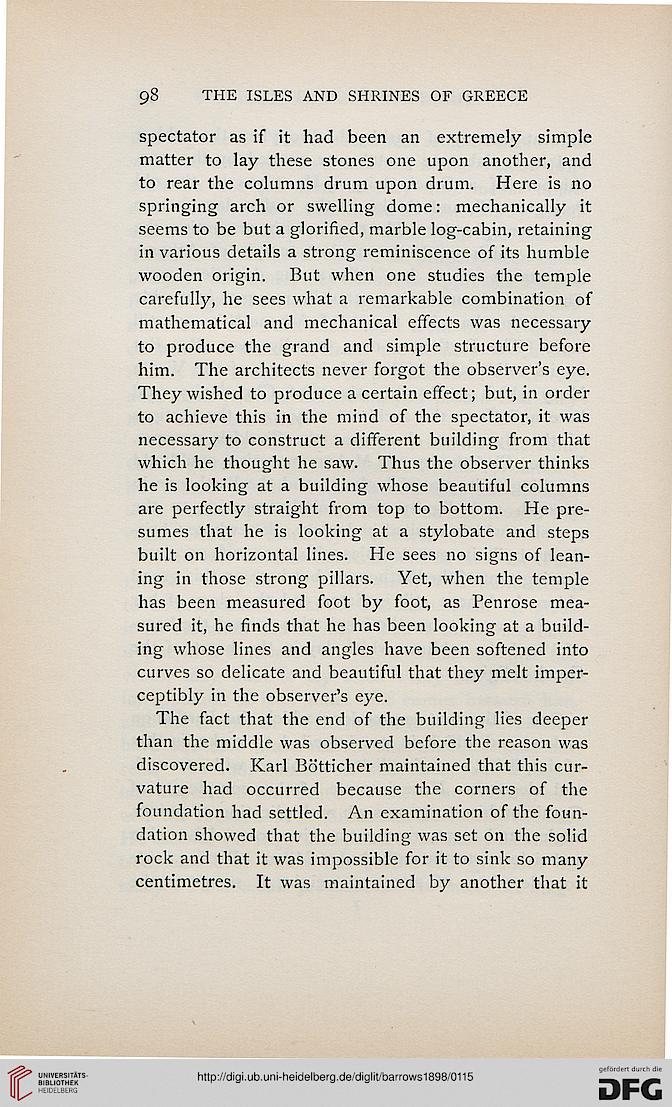 Information about OCR text
98 THE ISLES AND SHRINES OF GREECE

spectator as if it had been an extremely simple
matter to lay these stones one upon another, and
to rear the columns drum upon drum. Here is no
springing arch or swelling dome: mechanically it
seems to be but a glorified, marble log-cabin, retaining
in various details a strong reminiscence of its humble
wooden origin. But when one studies the temple
carefully, he sees what a remarkable combination of
mathematical and mechanical effects was necessary
to produce the grand and simple structure before
him. The architects never forgot the observer's eye.
They wished to produce a certain effect; but, in order
to achieve this in the mind of the spectator, it was
necessary to construct a different building from that
which he thought he saw. Thus the observer thinks
he is looking at a building whose beautiful columns
are perfectly straight from top to bottom. He pre-
sumes that he is looking at a stylobate and steps
built on horizontal lines. He sees no signs of lean-
ing in those strong pillars. Yet, when the temple
has been measured foot by foot, as Penrose mea-
sured it, he finds that he has been looking at a build-
ing whose lines and angles have been softened into
curves so delicate and beautiful that they melt imper-
ceptibly in the observer's eye.

The fact that the end of the building lies deeper
than the middle was observed before the reason was
discovered. Karl Bdtticher maintained that this cur-
vature had occurred because the corners of the
foundation had settled. An examination of the foun-
dation showed that the building" was set on the solid
rock and that it was impossible for it to sink so many
centimetres. It was maintained by another that it