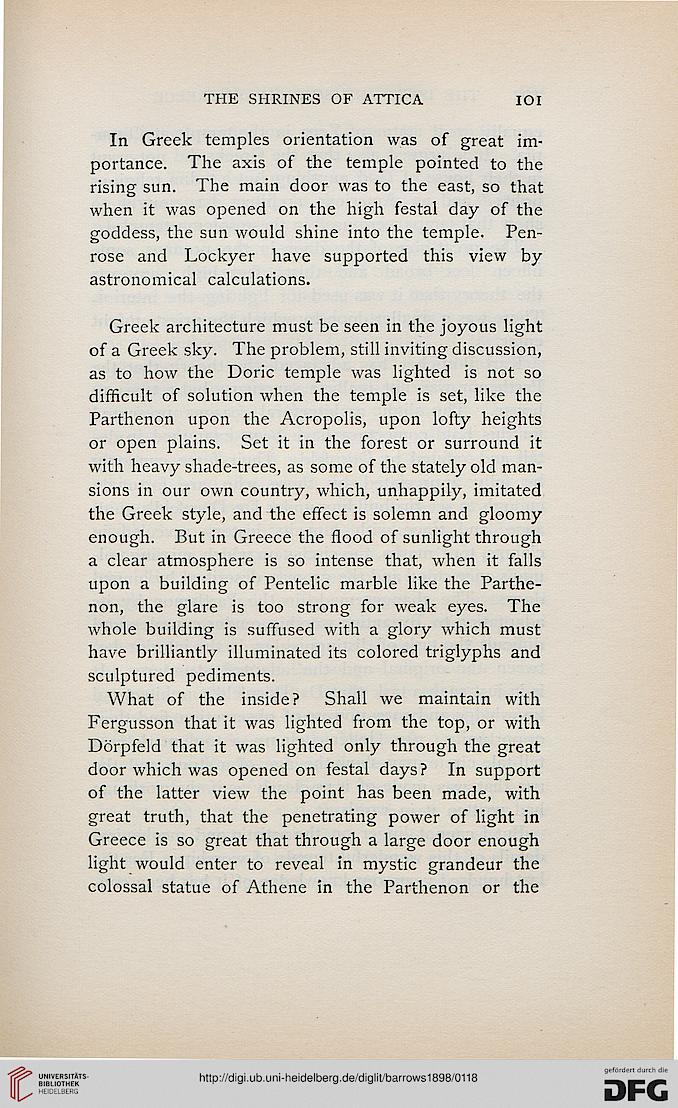 Information about OCR text
THE SHRINES OF ATTICA IOI

In Greek temples orientation was of great im-
portance. The axis of the temple pointed to the
rising sun. The main door was to the east, so that
when it was opened on the high festal day of the
goddess, the sun would shine into the temple. Pen-
rose and Lockyer have supported this view by
astronomical calculations.

Greek architecture must be seen in the joyous light
of a Greek sky. The problem, still inviting discussion,
as to how the Doric temple was lighted is not so
difficult of solution when the temple is set, like the
Parthenon upon the Acropolis, upon lofty heights
or open plains. Set it in the forest or surround it
with heavy shade-trees, as some of the stately old man-
sions in our own country, which, unhappily, imitated
the Greek style, and the effect is solemn and gloomy
enough. But in Greece the flood of sunlight through
a clear atmosphere is so intense that, when it falls
upon a building of Pentelic marble like the Parthe-
non, the glare is too strong for weak eyes. The
whole building is suffused with a glory which must
have brilliantly illuminated its colored triglyphs and
sculptured pediments.

What of the inside? Shall we maintain with
Fergusson that it was lighted from the top, or with
Dorpfeld that it was lighted only through the great
door which was opened on festal days? In support
of the latter view the point has been made, with
great truth, that the penetrating power of light in
Greece is so great that through a large door enough
light would enter to reveal in mystic grandeur the
colossal statue of Athene in the Parthenon or the