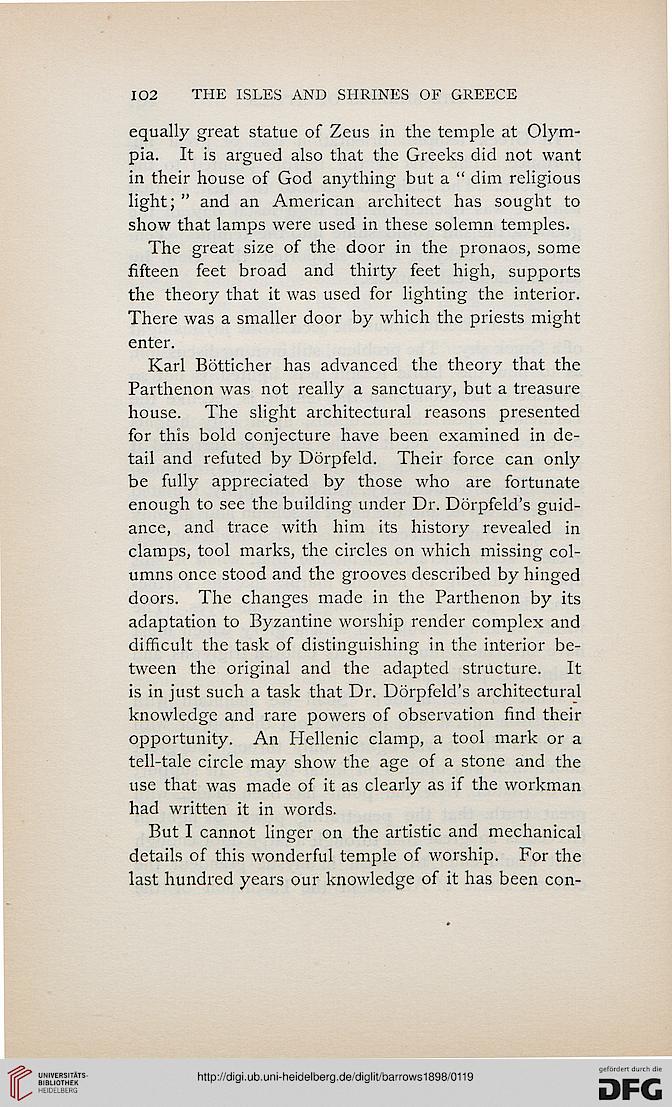 Information about OCR text
102 THE ISLES AND SHRINES OF GREECE

equally great statue of Zeus in the temple at Olym-
pia. It is argued also that the Greeks did not want
in their house of God anything but a " dim religious
light; " and an American architect has sought to
show that lamps were used in these solemn temples.

The great size of the door in the pronaos, some
fifteen feet broad and thirty feet high, supports
the theory that it was used for lighting the interior.
There was a smaller door by which the priests might
enter.

Karl Botticher has advanced the theory that the
Parthenon was not really a sanctuary, but a treasure
house. The slight architectural reasons presented
for this bold conjecture have been examined in de-
tail and refuted by Dorpfeld. Their force can only
be fully appreciated by those who are fortunate
enough to see the building under Dr. Dorpfeld's guid-
ance, and trace with him its history revealed in
clamps, tool marks, the circles on which missing col-
umns once stood and the grooves described by hinged
doors. The changes made in the Parthenon by its
adaptation to Byzantine worship render complex and
difficult the task of distinguishing in the interior be-
tween the original and the adapted structure. It
is in just such a task that Dr. Dorpfeld's architectural
knowledge and rare powers of observation find their
opportunity. An Hellenic clamp, a tool mark or a
tell-tale circle may show the age of a stone and the
use that was made of it as clearly as if the workman
had written it in words.

But I cannot linger on the artistic and mechanical
details of this wonderful temple of worship. For the
last hundred years our knowledge of it has been con-