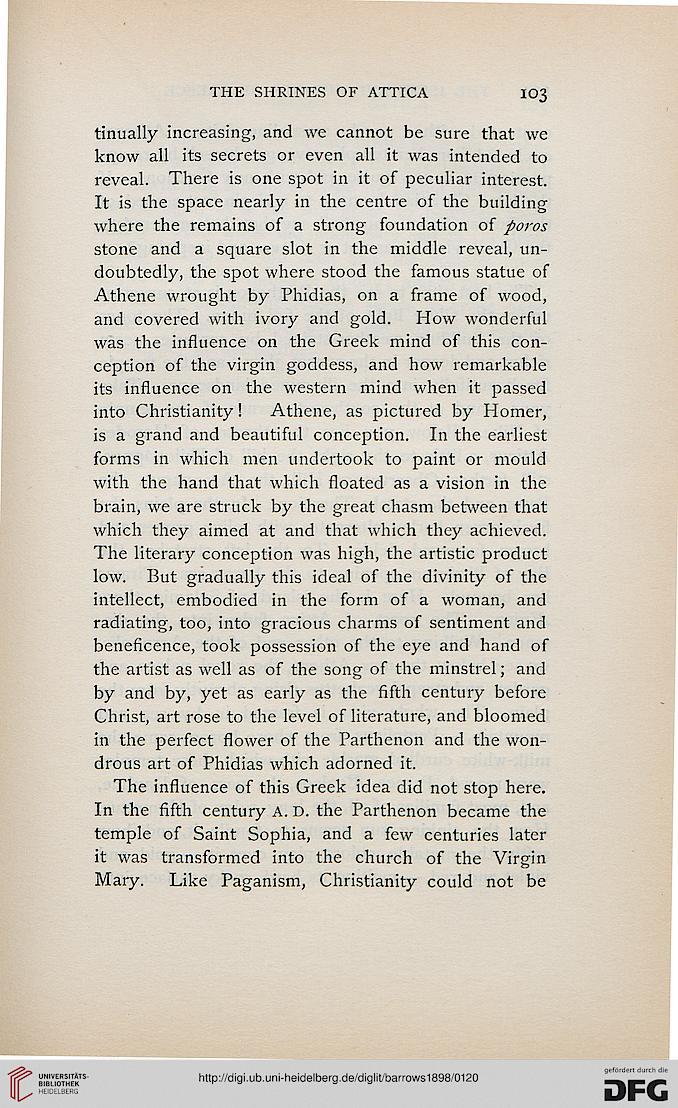 Information about OCR text
THE SHRINES OF ATTICA 103

tinually increasing, and we cannot be sure that we
know all its secrets or even all it was intended to
reveal. There is one spot in it of peculiar interest.
It is the space nearly in the centre of the building
where the remains of a strong foundation of poros
stone and a square slot in the middle reveal, un-
doubtedly, the spot where stood the famous statue of
Athene wrought by Phidias, on a frame of wood,
and covered with ivory and gold. How wonderful
was the influence on the Greek mind of this con-
ception of the virgin goddess, and how remarkable
its influence on the western mind when it passed
into Christianity! Athene, as pictured by Homer,
is a grand and beautiful conception. In the earliest
forms in which men undertook to paint or mould
with the hand that which floated as a vision in the
brain, we are struck by the great chasm between that
which they aimed at and that which they achieved.
The literary conception was high, the artistic product
low. But gradually this ideal of the divinity of the
intellect, embodied in the form of a woman, and
radiating, too, into gracious charms of sentiment and
beneficence, took possession of the eye and hand of
the artist as well as of the song of the minstrel; and
by and by, yet as early as the fifth century before
Christ, art rose to the level of literature, and bloomed
in the perfect flower of the Parthenon and the won-
drous art of Phidias which adorned it.

The influence of this Greek idea did not stop here.
In the fifth century A. D. the Parthenon became the
temple of Saint Sophia, and a few centuries later
it was transformed into the church of the Virgin
Mary. Like Paganism, Christianity could not be