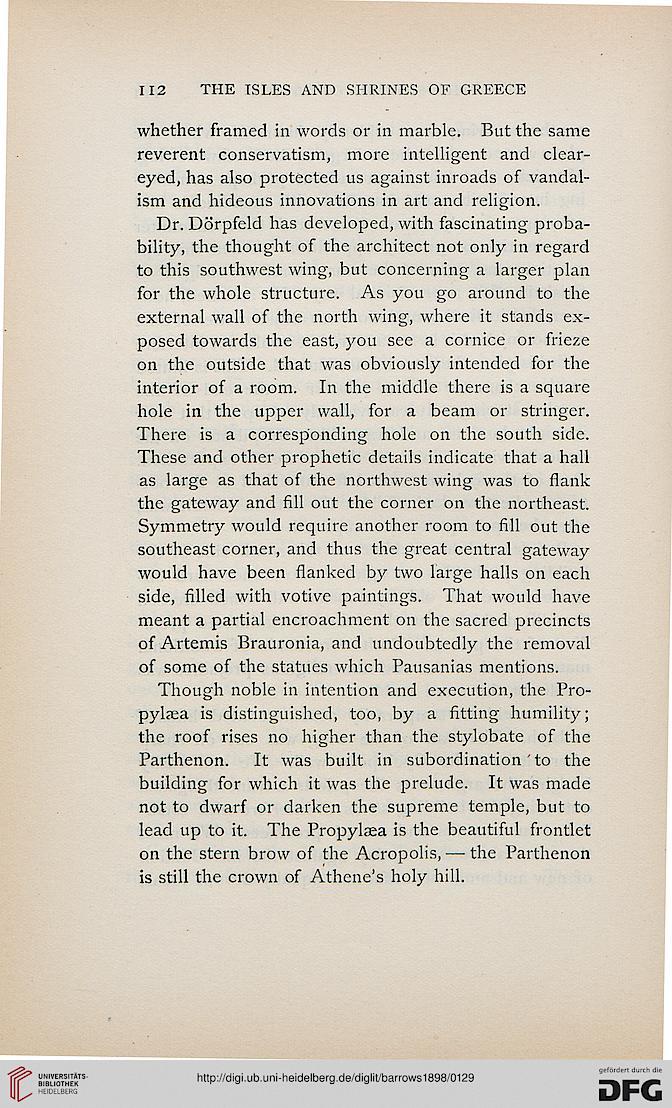 Hinweise zum OCR-Text
112 THE TSLES AND SHRINES OF GREECE

whether framed in words or in marble. But the same
reverent conservatism, more intelligent and clear-
eyed, has also protected us against inroads of vandal-
ism and hideous innovations in art and religion.

Dr. Ddrpfcld has developed, with fascinating proba-
bility, the thought of the architect not only in regard
to this southwest wing, but concerning a larger plan
for the whole structure. As you go around to the
external wall of the north wing, where it stands ex-
posed towards the east, you sec a cornice or frieze
on the outside that was obviously intended for the
interior of a room. In the middle there is a square
hole in the upper wall, for a beam or stringer.
There is a corresponding hole on the south side.
These and other prophetic details indicate that a hall
as large as that of the northwest wing was to flank
the gateway and fill out the corner on the northeast.
Symmetry would require another room to fill out the
southeast corner, and thus the great central gateway
would have been flanked by two large halls on each
side, filled with votive paintings. That would have
meant a partial encroachment on the sacred precincts
of Artemis Brauronia, and undoubtedly the removal
of some of the statues which Pausanias mentions.

Though noble in intention and execution, the Pro-
pylsea is distinguished, too, by a fitting humility;
the roof rises no higher than the stylobate of the
Parthenon. It was built in subordination to the
building for which it was the prelude. It was made
not to dwarf or darken the supreme temple, but to
lead up to it. The Propylsea is the beautiful frontlet
on the stern brow of the Acropolis, — the Parthenon
is still the crown of Athene's holy hill.