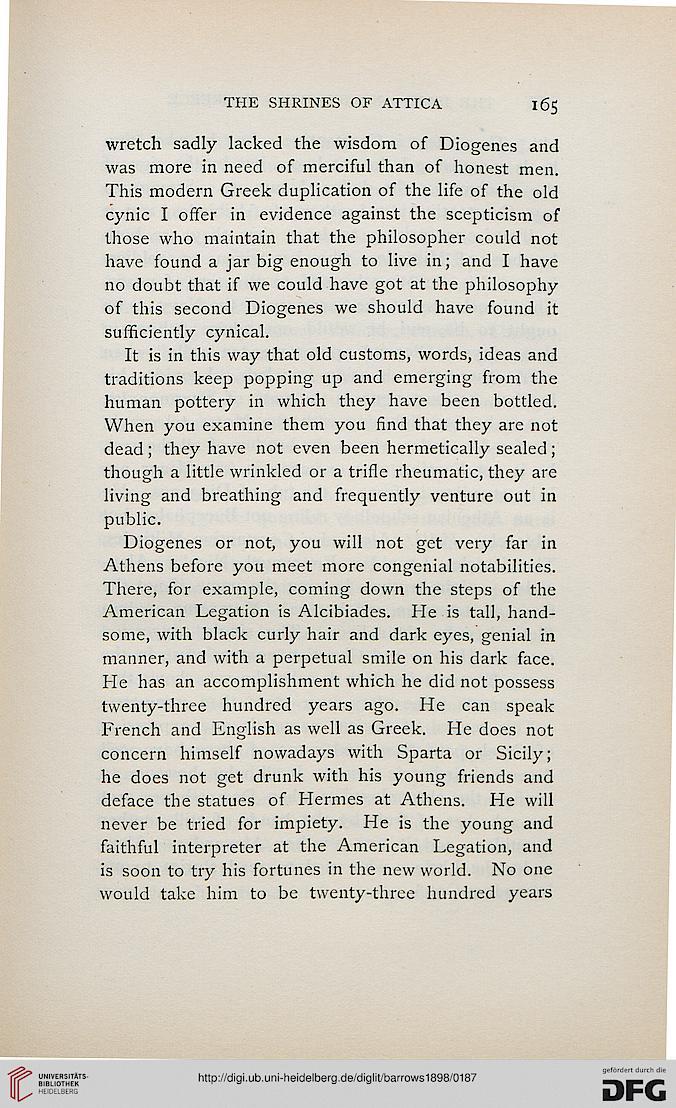 Information about OCR text
THE SHRINES OF ATTICA 165

wretch sadly lacked the wisdom of Diogenes and
was more in need of merciful than of honest men.
This modern Greek duplication of the life of the old
cynic I offer in evidence against the scepticism of
those who maintain that the philosopher could not
have found a jar big enough to live in; and I have
no doubt that if we could have got at the philosophy
of this second Diogenes we should have found it
sufficiently cynical.

It is in this way that old customs, words, ideas and
traditions keep popping up and emerging from the
human pottery in which they have been bottled.
When you examine them you find that they are not
dead; they have not even been hermetically sealed;
though a little wrinkled or a trifle rheumatic, they are
living and breathing and frequently venture out in
public.

Diogenes or not, you will not get very far in
Athens before you meet more congenial notabilities.
There, for example, coming down the steps of the
American Legation is Alcibiades. He is tall, hand-
some, with black curly hair and dark eyes, genial in
manner, and with a perpetual smile on his dark face.
He has an accomplishment which he did not possess
twenty-three hundred years ago. He can speak
French and English as well as Greek. He does not
concern himself nowadays with Sparta or Sicily;
he does not get drunk with his young friends and
deface the statues of Hermes at Athens. He will
never be tried for impiety. He is the young and
faithful interpreter at the American Legation, and
is soon to try his fortunes in the new world. No one
would take him to be twenty-three hundred years