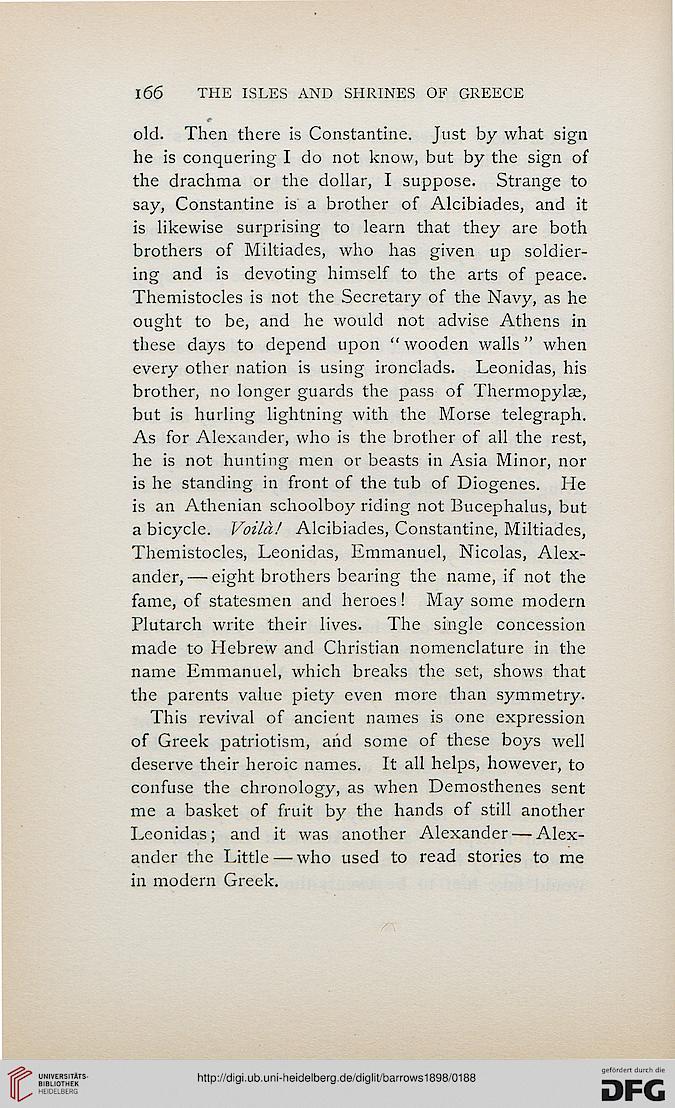 Information about OCR text
166 THE ISLES AND SHRINES OF GREECE

old. Then there is Constantine. Just by what sign
he is conquering I do not know, but by the sign of
the drachma or the dollar, I suppose. Strange to
say, Constantine is a brother of Alcibiades, and it
is likewise surprising to learn that they are both
brothers of Miltiades, who has given up soldier-
ing and is devoting himself to the arts of peace.
Themistocles is not the Secretary of the Navy, as he
ought to be, and he would not advise Athens in
these days to depend upon " wooden walls" when
every other nation is using ironclads. Leonidas, his
brother, no longer guards the pass of Thermopylae,
but is hurling lightning with the Morse telegraph.
As for Alexander, who is the brother of all the rest,
he is not hunting men or beasts in Asia Minor, nor
is he standing in front of the tub of Diogenes. He
is an Athenian schoolboy riding not Bucephalus, but
a bicycle. Voila! Alcibiades, Constantine, Miltiades,
Themistocles, Leonidas, Emmanuel, Nicolas, Alex-
ander, — eight brothers bearing the name, if not the
fame, of statesmen and heroes! May some modern
Plutarch write their lives. The single concession
made to Hebrew and Christian nomenclature in the
name Emmanuel, which breaks the set, shows that
the parents value piety even more than symmetry.
This revival of ancient names is one expression
of Greek patriotism, and some of these boys well
deserve their heroic names. It all helps, however, to
confuse the chronology, as when Demosthenes sent
me a basket of fruit by the hands of still another
Leonidas; and it was another Alexander — Alex-
ander the Little — who used to read stories to me
in modern Greek.