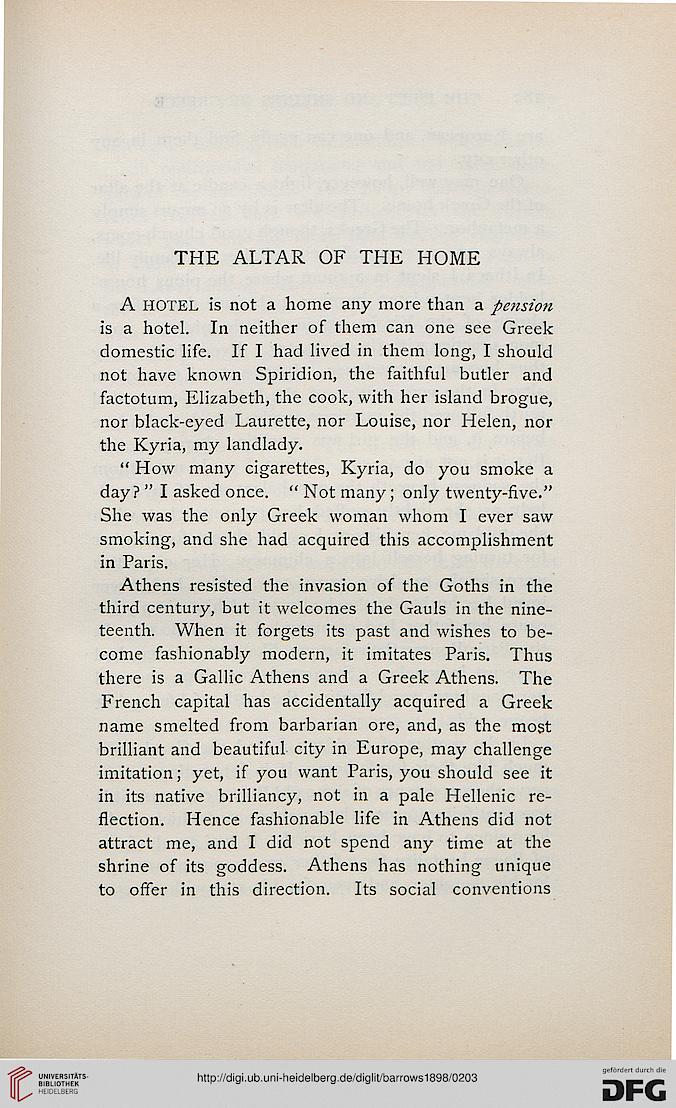 Information about OCR text
THE ALTAR OF THE HOME

A hotel is not a home any more than a pension
is a hotel. In neither of them can one see Greek
domestic life. If I had lived in them long, I should
not have known Spiridion, the faithful butler and
factotum, Elizabeth, the cook, with her island brogue,
nor black-eyed Laurette, nor Louise, nor Helen, nor
the Kyria, my landlady.

" How many cigarettes, Kyria, do you smoke a
day? " I asked once. " Not many; only twenty-five."
She was the only Greek woman whom I ever saw
smoking, and she had acquired this accomplishment
in Paris.

Athens resisted the invasion of the Goths in the
third century, but it welcomes the Gauls in the nine-
teenth. When it forgets its past and wishes to be-
come fashionably modern, it imitates Paris. Thus
there is a Gallic Athens and a Greek Athens. The
French capital has accidentally acquired a Greek
name smelted from barbarian ore, and, as the most
brilliant and beautiful city in Europe, may challenge
imitation; yet, if you want Paris, you should see it
in its native brilliancy, not in a pale Hellenic re-
flection. Hence fashionable life in Athens did not
attract me, and I did not spend any time at the
shrine of its goddess. Athens has nothing unique
to offer in this direction. Its social conventions